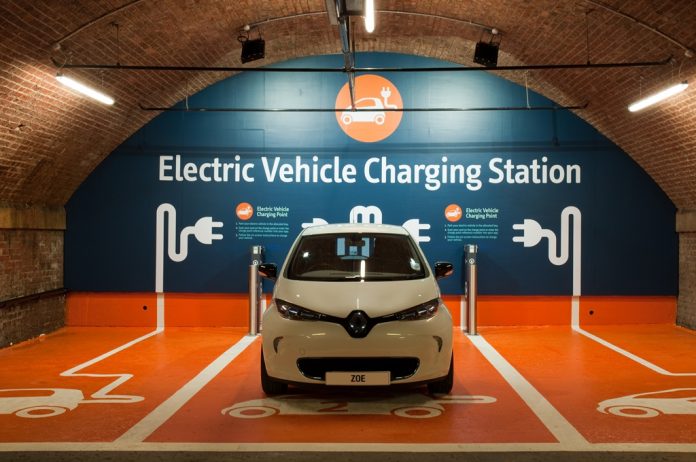 Greater Manchester’s ambition to become a leading green city has been boosted with £3 million of new funding to expand and promote its electric vehicle charging network.

The Greater Manchester Electric Vehicle (GMEV) network is already one of the biggest and most modern in the UK, with 318 charging points.A further 48 rapid charging points (24 dual bays) are now set to be installed next year.

The announcement follows hot on the heels of the region’s first Green Summit, where Mayor Andy Burnham outlined plans to double the size of the GMEV network.

Road transport in Greater Manchester is responsible for almost two-thirds of the emissions of nitrogen oxides (NOx)2, one of the most harmful pollutants, and the region has been in breach of its legal limits for nitrogen dioxide (NO2) every year since 2011.

The new rapid charging points will be installed in areas of Greater Manchester where they can best help reduce high levels of NO2.

As well as the new charging points, the funding will support a major push to raise awareness and take-up of electric vehicles in the region.

Andy Burnham, Mayor of Greater Manchester, said: “This week I issued a challenge to people across Greater Manchester to help make us a leading green city-region across the UK and Europe. Tackling transport-related air pollutants is a key part of this and one of our biggest challenges.

“The Greater Manchester Electric Vehicle scheme is proving to be a real success, with nearly 2,000 drivers now registered and more joining every month.

“As vehicle costs reduce and battery capacity increases, with some vehicles now offering more than a 300-mile range, uptake in electric vehicles will surely increase.

“Going electric is becoming easier than ever so it’s vital that we have the right charging infrastructure to support demand for greener travel.

“This funding is a step in the right direction, but ultimately I want to see the GMEV network double in size – and everyone playing their part in reducing car-related fumes.”

“Poor air quality contributes to ill health and is also a contributing factor in thousands of deaths across the region each year, as well as limiting economic growth.

“This ‘early measure’ funding should help make a real difference to air quality in the worst affected areas of Greater Manchester.

“But it’s just part of a much bigger picture, as we work with Government to develop a wide-ranging Greater Manchester plan to clean up the air we all breathe as quickly as possible.”

The GMEV scheme launched in July 2013 with £2.1 million funding from the Office of Low-Emission Vehicles (OLEV), against a backdrop of low electric vehicle use.

Nearly 54,000 charging sessions took place in 2017, compared to around 10,000 in 2014, and the GMEV network has charged 2.5 million electrically powered vehicle miles. This has saved 651 tonnes of CO2 emissions and 1,600kg of NO2 compared with the same journeys made in Greater Manchester by petrol or diesel vehicles.

There are 2,234 registered plug-in vehicles in Greater Manchester and, nationally, ultra-low-emission vehicles (ULEV) form 2.9% of all new car sales.

New study launched to find out what makes canals the most attractive spaces in...