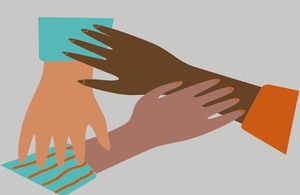 The government is increasing its calls to get vaccinated as new official research reveals Pakistanis and Bangladeshis were even more likely to die from COVID compared to white people in the first part of the second wave than in the first wave.

Disparities improved for other groups, including Black Africans, Black Caribbeans, Chinese and Indians, but not for people from South Asian backgrounds, a new government report said

Research highlighted in the report shows that though people are positive about the vaccine, some ethnic minority people held negative feelings, influenced by media narratives and other misinformation, and stated that they were hesitant to take the jab.

According to the ONS, from early December 2020 to early January 2021, less than half (49%) of Black or Black British adults reported that they were likely to have the vaccine. The latest OpenSAFELY data reports that approximately 60% of black people over 70 have been vaccinated compared to 75% for South Asians and 90% of white people.

“Throughout the COVID-19 pandemic, this Government has done everything it can to protect everyone in this country.

“The latest data shows that this is not a one-size-fits-all situation. Outcomes have improved for some ethnic minority groups since the first wave, but we know some communities are still particularly vulnerable. Our response will continue to be driven by the latest evidence and data and targeted at those who are most at risk.

“There is light at the end of the tunnel, and as the vaccine rollout continues, I urge everyone who is offered one to take the opportunity, to protect themselves, their family, and their community.”