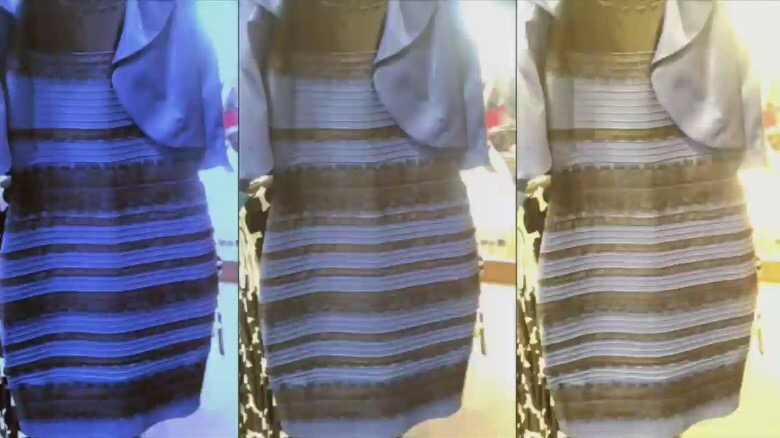 It has sent the Internet crazy, the big topic of conversation after Caitlin McNeil put a picture of a two-tone dress on the website Tumblr after she and her friends could not agree on the colour.

The dress was going to be worn at a wedding that a close friend’s mother was attending but after being posted on Thursday, the picture went viral with the celebrity twitteratti having their say.

So what colour is it and why are people seeing white and gold or blue? Clinical vision scientist, Dr Neil Parry, from the University of Manchester explains all.

“This is an example of a bistable image, like the famous duck/rabbit and face-vase illusions.
“These illusions are ambiguous and so the brain tries to build a model of the likeliest interpretation. Sometimes it has prior information, sometimes not.

“This photo is ambiguous because there are clues about the ambient light which may be wrong. In fact we know it’s a badly exposed picture because the original dress is deep blue.
“The washed out background of the image gives the impression that it was taken outside on a bright day. White reflects the ambient light and so when we are outside, white is actually quite blue when measured by a machine that just reports reflected wavelengths.
“But the visual system isn’t a dumb machine.

There is a phenomenon called colour constancy, which helps keeps our perception constant under widely varying illumination, for example the huge change in the colour of daylight from the morning (blue) to the evening (red).
“Because of colour constancy, the bus you get to work in the morning appears the same colour as the one you take home, even though its physical colour can be changed dramatically by the illuminant.

Colour constancy needs context and the context here is ambiguous.
“Going back to the dress, if you take the context away (by showing a naive observer a small section of the dress), most people say it’s blue if they haven’t already seen the whole picture.
“When I first saw it I wasn’t sure and swayed between blue and white. But now I know that the dress is definitely deep blue and the photo is overexposed, I no longer ever perceive it as white.
“So there is another factor at play and that is prior knowledge. The visual brain uses models of the world whenever it can to help make sense of what it is seeing.
“If, instead of a dress, it had been a banana, then, regardless of the illuminant and photographic inaccuracy, it’s more likely to be perceived as yellow, because we all know that that a ripe banana is supposed to be yellow.”

So there you have it.

Beam me up Scotty and solar power the norm for 2025