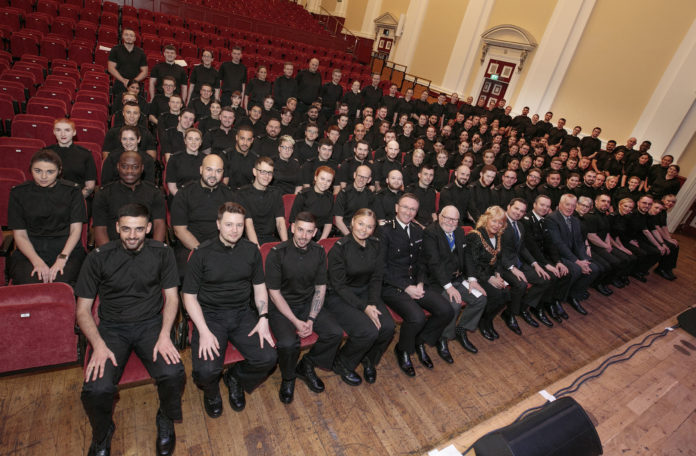 The first attestation of 2020 took place yesterday on 8 January at the Albert Hall in Bolton and saw the largest single intake of female officers that Greater Manchester Police (GMP) has recruited.

Out of the 142 officers attesting during the ceremony, 67 were female recruits, totalling 45% of the new starters. This is a significant increase in female recruits and highlights the work being done by the force to establish diversity, representative of the communities served.

Chief Inspector Tony Alogba from the Positive Action team stated: “Here at GMP we are so pleased to be able to welcome so many female officers to the force.

“GMP is working hard to recruit officers that are reflective of the communities we serve and welcome the increased interest from females of all backgrounds.I wish everyone who has attested a successful career with GMP”.

The ceremony was attended by Chief Constable Ian Hopkins with the evenings officiating magistrate Stephen Paine.

Here are just a few of the people attesting:

“I am absolutely eager to do my best in serving the diverse communities of Greater Manchester. Therefore, I look forward to using my multi-lingual skills and knowledge of various European and South Asian cultures, to assist in investigations and to better understand the needs of the communities.

“I am the first female in my family to join the Police Service. Having come from an ethnic minority background, I always wanted to do something unique. I feel that women not just from BAME backgrounds but in general, are underrepresented in the force – I hope to encourage and inspire more women to join.

“What surprised me the most about GMP is the supporting nature and the promotion of individualism – GMP cater for every individual’s needs.”

“I was inspired to join the force by my father and sister who are both officers. My sister has served as a great female role model within the job and introduced to me to other inspirational women that have worked hard to move up the ranks to change the face of policing.

“Coming from a police family background nothing has surprised me so far, but I’m sure once I start on my assigned division there will be plenty of surprises in store for me.”

“In 2008 I joined GMP as a member of police staff, then in 2018 I enrolled as a Special Constable, covering the Trafford division which I really enjoyed and which gave me a great introduction to policing, this made me more determined to become a full time officer.

“Policing works better if we have a diverse workforce.  Some members of the public are more comfortable speaking to female officers and modern policing needs to reflect the needs of the communities that we serve, and that can only happen if the public feel that they are represented.”

“I joined GMP at 16 as an apprentice then progressed into the role as an Operational Support Officer in MASH (Manchester Action on Street Health). Whilst working there I found my passion for safeguarding and having built that background experience, I now want to utilise my safeguarding knowledge in becoming a Police Constable.

“I was inspired to join GMP as I know that there are equal opportunities readily available to everyone across the force, I know I will continue to be treated with equal respect as everyone else will be. I believe it is important to have both women and men representing the police force and displaying equality within GMP because it allows the chance to deliver different aspects of service and experiences to the public.

“The support networks available to myself and colleagues has surprised me, I have felt openly welcomed into GMP since 2018. It is clearly evidenced that members of GMP are committed to supporting employees throughout their careers and in personal aspects of life.”

“I am a soldier in the Army Reserve and a volunteer for Bury Children’s Rights. Both my military career and volunteer work provides me with an enormous sense of fulfilment and pride due to the difference I make to people’s lives and could potentially make in the future. I wanted that same sense of achievement and opportunity to make a difference to extend over to my civilian career.

“For me, my gender was irrelevant to my application. My mum however, inspired me to join the military reserve having served herself when I was a child. My time in the military then inspired me to join the police and I believe the two will complement each other well. I am enthusiastic about public service and I’m partial to surprising people who think women aren’t interested in particular male dominated career paths.

“The team spirit emerged from day one which is great to be a part of. My colleagues are a diverse group of individuals from all walks of life meaning that we not only learn from the tutors but we learn from one another.  I was also highly surprised by the number support systems in place for officers. It is reassuring to know that should I need any support for my physical or mental welfare in the future there are a variety of options in place.”

Fire service warning over barbecues on the moors

£400,000 boost to cut neighbourhood crime in Moss Side and Rusholme