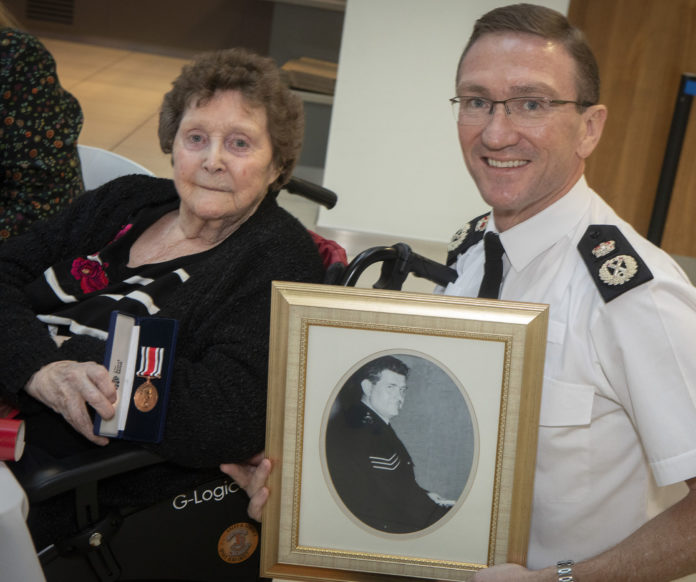 Officers from across the Force nominated people from their local area to celebrate together with a festive afternoon of food, conversation and laughter hosted by Chief Constable Ian Hopkins.

The invitees were served their three course meal by GMP’s most senior officers. They were also entertained by carol singers and a visit from Santa.

One of the special guests included Marjorie Kew. Marjorie’s husband, David Kew, who sadly passed away 15 years ago, gave 27 years of service to GMP. He began as a Special Constable in 1962 before being promoted to Sergeant and then to Inspector at Ashton Police station before his retirement in 1988.

Following his retirement, Marjorie and David both became foster carers. Throughout the years they looked after and cared for over twenty children, from babies to teenagers, many of whom Marjorie is still in contact with.

“David first became interested in joining GMP after he assisted a police officer in detaining a thief outside a bank nearly 60 years ago.

“I had a fantastic time at the community lunch and was overwhelmed by people’s kind words.”

Chief Constable Ian Hopkins said: “It’s great to be able to bring members of our community together particularly over the festive period.

“I would like to thank all of our guests for joining us for lunch last week; I hope they all enjoyed themselves.

“We served over 100 lunches and heard some inspiring stories from those who attended. In particular I was honoured to present Marjorie Kew with her husband’s long service gold medal award and celebrate the outstanding work they have both done for their community.”

Lidl has donated over 58,000 meals to good causes across Manchester over the past...