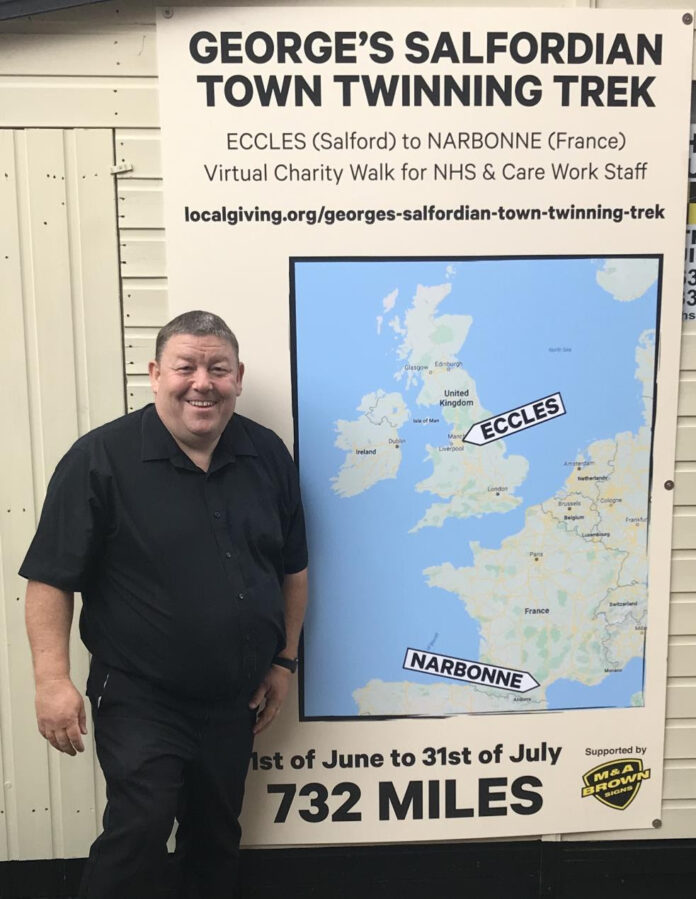 George is aiming to raise as much money as possible to treat NHS, care and key workers to a fully paid break at the Salfordian Hotel, Southport when it re-opens.

His virtual walk will cover 732 miles (1178 kilometres) – the distance to Narbonne in the south of France – which is twinned with his home town of Eccles.

“I started by aiming to walk 12 miles a day minimum, either round my garden or on a treadmill in the shed to complete the distance in 61 days – that’s almost a half marathon every day,” said George.

“I’m now doing a half marathon a day. I’ve almost worn out a brand new pair of trainers and I’ve ‘left’ the UK and am now close to Le Mans in France.

“I want to raise as much money as possible to give them a holiday and say thank you for all their hard work during the pandemic. It’s £40 per night for bed and full board so if I raise £2000 that’s 53 nights we can offer. I’ve raised £940 so far so it’s going well.”

Deputy City Mayor Councillor John Merry said: “That’s a huge challenge to take on and I wish George every success in reaching his goal. Salford owes a huge debt of gratitude to NHS, care and key workers for their response to the pandemic and it would be wonderful to offer as many of them as possible the chance for a well-deserved break.”

George is the manager of the Beacon Centre, London Road, Salford which is normally a base for youth services and local organisations to meet. It also acts as a rest centre and support hub when emergency evacuations are needed, such as during the 2016 Boxing Day floods.