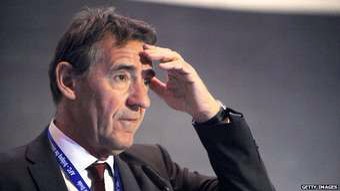 The Manchester-born economist Jim O’Neill has been appointed by the Chancellor George Osbourne as Commercial Secretary to the Treasury giving him a key role in setting up the so called Northern Powerhouse.

The fifty eight year old O’Neill, who grew up in Gatley and attended Burnage Comprehensive, is probably best known for coining the term BRIC referring to Brazil, Russia, India and China, four rapidly developing countries outside of the traditional developed world of the G7.

In Manchester he is probably better known as an avid United Fan who briefly sat on the board before the Glazer take over and was a member of the so called Red Knights who attempted to take control of the club back in 2010.

He is chairman of the Greater Manchester Local Enterprise Partnership Advisory Board,  Chairman of the Cities Growth Commission and also an honoury Professor of Economics at the University of Manchester.

He worked for Goldman Sachs from 1995 until April 2013, spending most of his time there as Chief Economist and before that had worked for Swiss Bank Corporation, Marine Midland Bank and Bank of America, starting in the City in 1982.

His new position has been universally welcomed, seen passionate Northerner who understands the region, its people, its problems and more importantly its vast potential.

“It is this deep understanding of the economic underpinnings of the emerging markets model which served as a catalyst for an acceleration of global growth from the middle of the last decade that will ultimately help Mr O’Neill to unpick the intractable economic problems that have plagued the North for over a generation. “

“Since the industrial decline, which really began towards the end of the 1960s, the North has effectively become Britain’s equivalent of an under-developed region. High levels of unemployment and a lack of investment that followed the demise of the North as a major manufacturing and productive area have blighted large areas the country for decades and rendered these places almost economically useless.”

Whilst the Chancellor, speaking in Manchester said “He’s one of the world’s top economists. And he’s the man who invented the term ‘the BRICs’ and changed the way everyone viewed emerging economies.”

The City commission’s final report, published in 2013, called for fresh powers to be handed to cities, including the right to retain far more of their local tax revenues something that will align to the move towards greater autonomy for Manchester but he is also known for his sceptic all views on the need for a High Speed Rail Link.

Just this week O’Neill In his role as head of a government-appointed review team into antibiotics, he announced that antibiotic resistance could kill 300 million people prematurely in the next 35 years adding that “You could end up dying from something as simple as a shaving cut.”

And I said-What about Breakfast at Cloud 23