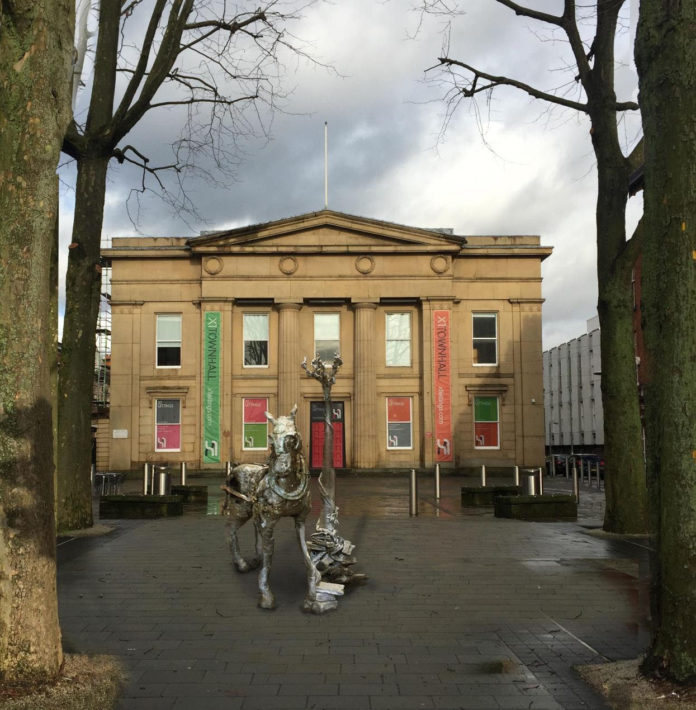 The world’s first street to be lit by gas is to be celebrated with a sculpture by the creator of Liverpool’s iconic Cilla Black statue.

Many more firsts including the Bridgewater Canal and famous Salfordians, including James Joule who first discovered the first law of thermodynamics, artists L S Lowry and Harold Riley, musicians and actors Peter Hook, Robert Powell and Ben Kingsley will be represented on the horse’s skin, to commemorate the achievements and wealth of talent Salford has produced.

Actor Albert Finney, who was born in Salford in 1936, has contributed a quote from one of his films – “I’m out for a good time, anything else is propaganda” and signed it. That will be added to the sculpture.

Even Bexley Square, where the statue will stand outside the newly refurbished magistrates court, was the scene of a moment in history, captured in Walter Greenwood’s famous book Love on the Dole.  Ten thousand unemployed men gathered to protest over cuts to unemployment benefits at the height of the Depression and clashed with police. Folk singer Ewan McColl was also in the crowd.

Councillor Stephen Coen, executive support member for culture and leisure, said: “It’s incredible how significant Chapel Street has been in the history of Salford. Peel Park and the public library were opened to anyone regardless of social status, which was radical for Victorian times.

“Chapel Street is also home to the UK’s only Working Class Movement Library and the University of Salford so its pioneering tradition continues.

“The former town hall and magistrates court building in Bexley Square has been transformed into apartments and both the council and developers were keen to add some iconic artwork outside to commemorate the heritage of the city.

“Gas street lighting, which began in 1806 in Salford, allowed factory deliveries to continue after dark, boosting productivity while horse power was used for transport, in coal mines and along the canal system which was born in Salford.

“The horse’s mane will be made from books, celebrating the first public library in what is now Salford Museum and Art Gallery.”

Funding will come from developers X1 who refurbished the town hall through a Section 106 payment of £50,572 for works to improve the public space outside and commemorate the areas heritage and a local company has offered to install it at no cost. The statue will be cast in the North West and finished in Salford.

Internationally renowned sculptor Emma Rodgers will work from Salford’s artistic hub Islington Mills and will run free workshops for local people and schools to help create the statue. She has already ‘donated’ around £2000 worth of pro bono research and work on the project which will cost just under £50,000 to create.

Emma Rodgers, is one of Britain’s leading sculptors and has exhibited worldwide, including the Victoria and Albert Museum, Chicago, New York and Singapore.

Her most famous pieces include a statue of Cilla Black outside the Cavern Club in Liverpool and the Meccano Liver Bird and Liverpool Football Club statues.