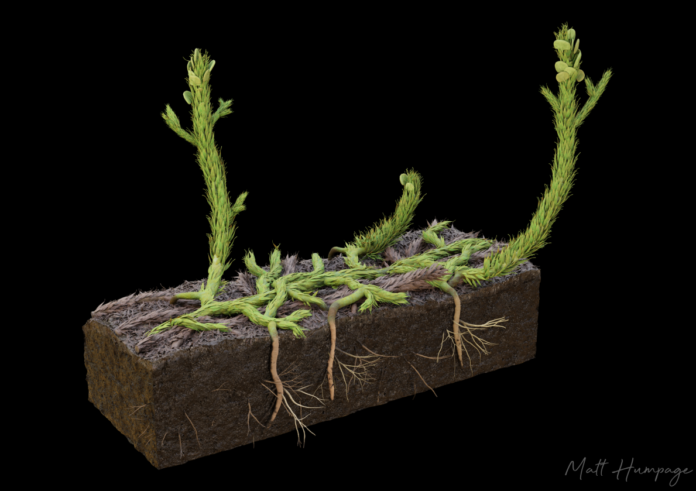 A 3D model of a 400-million-year-old fossil has shed light on an enduring mystery about how some of Earth’s first plants evolved and helped make the planet liveable.

The model reveals how one of the earliest form of roots developed during the Early Devonian period, a key era when plants began to spread across land.

The evolution of plants from simple stems to more complex forms with roots had a dramatic impact on the planet, experts say. Plant roots reduced atmospheric CO2 levels, stabilized the soil and revolutionised water circulation across the surfaces of continents.

An international team led by the University of Edinburgh used digital techniques to produce the first complete 3D reconstruction of Asteroxylon mackiei, an early ancestor of clubmosses – evergreen herbs with needle-like leaves that are a key feature of Scottish flora today.

The model allowed scientists to visualise the structure and understand the root development of this ancient plant, whose fossil was found in the Rhynie chert – a sedimentary deposit near the Aberdeenshire village of Rhynie, that holds some of the oldest and best-preserved plant fossils in the world.

The findings show that the roots of Asteroxylon developed in a fundamentally different way from contemporary plants.

It grew by a process known as dichotomous branching – where the tip of a leafy shoot splits to produce two new branches, one a shoot, the other developing into a root.

In today’s plants new roots arise from within growing shoots or roots.

Experts say this discovery shows a hitherto unseen evolutionary stage between the earliest plants that lacked roots and living clubmosses that possess them.

“How plants evolved from simple stems to complex forms with roots and leafy shoots remains one of the key questions in plant evolution. First discovered a century ago, the Rhynie chert continues to provide fossils that change our view of land plant evolution. Our 3D model of Asteroxylon demonstrates the value of evidence-based reconstructions for understanding the development and evolution of the first complex plants on Earth.” said Dr Sandy HetheringtonSchool of Biological Sciences