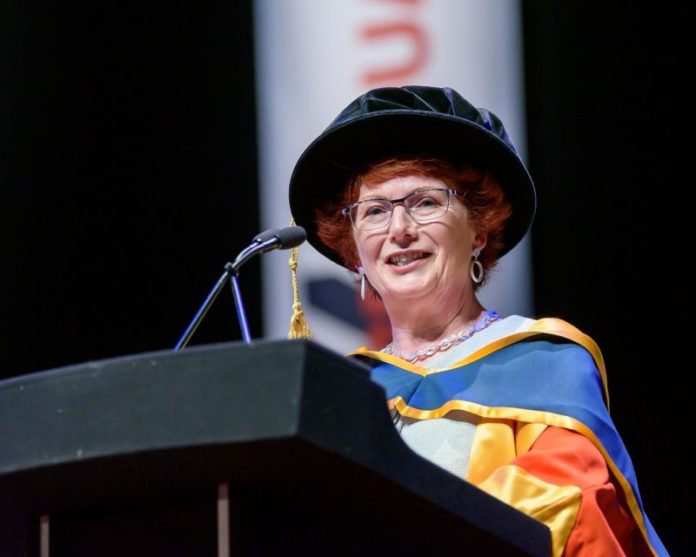 FORMER MP for Salford and Eccles and Cabinet Minister who became a strong advocate in the fight against dementia has been recognised by the University of Salford.

Hazel Blears served as Minister in Tony Blair’s Labour Government and later became chair of the University’s Dementia Institute. She received an honorary doctorate at a ceremony at the Lowry.

Hazel was born and raised in Salford and is a passionate champion for the city and its people. She has campaigned throughout her life for a fair deal for working people and for recognition of the skills and talents of Salfordians.

Her mother Dorothy developed dementia and Hazel helped her Dad Arthur to care for her. This experience led to her determination to fight against the condition and to press for more support in the search for prevention and a cure. Hazel was a founder member and Chair of the University’s Dementia Institute, which is dedicated to people living with dementia who develop and evaluate research into maximising the independence and quality of life of those with the disease and their friends, families and carers. Hazel is also a long-standing trustee of the Social Mobility Foundation and an Alzheimer’s Society Ambassador.

She said: “I’m very proud of the work that goes on at the Institute for Dementia and grateful for the leadership and support of Helen Marshall the Vice Chancellor, Margaret Rowe the Dean and Prof Anthea Innes, the Director, all of our Associates and colleagues. What makes it different is that a lot of the activity is driven by people living with the condition. We are making good progress in the fight against dementia thanks to places like this in Salford.

We looked after my mum at home so I know how hard it can be for the families as well as the people with the condition themselves. The work the institute does is vital.”

Hazel is passionate about empowering people to take leading roles in their communities and in making commercial organisations be more socially responsible. Her favourite saying is: “Doing Good is Good Business.”

Hazel worked as a lawyer in private practice and local government for 20 years. She was also a councillor on Salford City Council for 8 years and was elected as MP for Salford in 1997. Whilst an MP, Hazel held ministerial roles in Health, Police and Counter Terrorism and was Secretary of State for Communities and Local Government.

She added: “I was brought up in a two bedroom house In Salford with a tin bath but my mum always said we could do anything we wanted if we worked hard enough. The world could be our oyster. My upbringing gave me the grit I needed to fight to succeed and played a huge part in my success.

“I would say the same to the graduates today. If you want something enough and work hard for it then you can achieve whatever you want. Just keep going.”