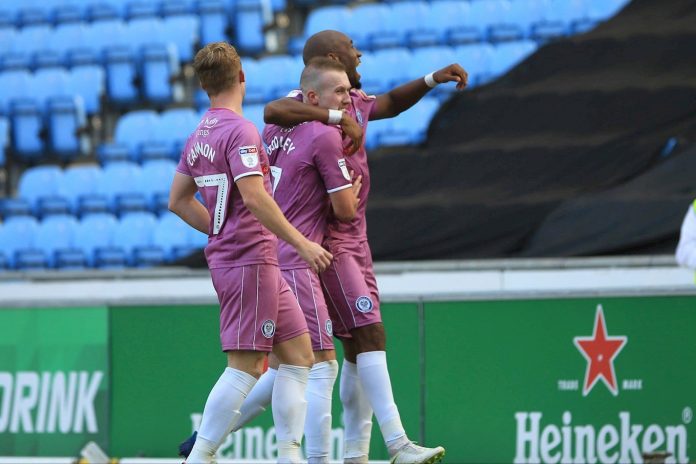 The substitute was the quickest to pounce on Marek Rodak’s save to deny Callum McManaman and poke the rebound into an empty net.

Bolton Wanderers came from two goals down to earn a point on the road at Preston North End .

After falling behind early in the game to goals from Callum Robinson and Alan Browne, Wanderers were level before the break with Sammy Ameobi and Pawel Olkowski finding the net, and Phil Parkinson’s side went onto earn a point.

Into League One and Rochdale secured three points from a pulsating encounter at the Ricoh Arena, thanks to a second-half goal from Calvin Andrew.

Both side had chances in the first period, but it was the hosts who created the majority, although they wasted their openings.

Dale made them pay at the start of the second period, when Andrew opened his account for the season just over a minute after the restart.

Ian Henderson had the ball in the back of the net twice but both were ruled out for offside, before Keith Hill’s men had to dig-in and defend superbly to secure a magnificent three points on the road.

In League Two,Bury continued their unbeaten home record with a 3-2 victory over Morecambe, as Jermaine Beckford found himself back in the matchday squad after a lengthy lay-off.

Adam Thompson opened the scoring, and a brace from Dom Telford saw the Shakers to dominant victory , despite Rhys Oates and Liam Mandeville scoring in reply for the visitors.

Latics did take the lead early on in the first half before the visitors got one back and were denied going ahead from the penalty spot by Danish goalkeeper, Daniel Iversen.

In the second half the team continued to push and were made to wait until the 89th minute for the breakthrough they were looking for.

George Edmundson’s cross was bundled in after Sam Surridge managed to get a touch on it, prompting scenes of exuberant celebration from the the Boundary Park crowd and touchline.