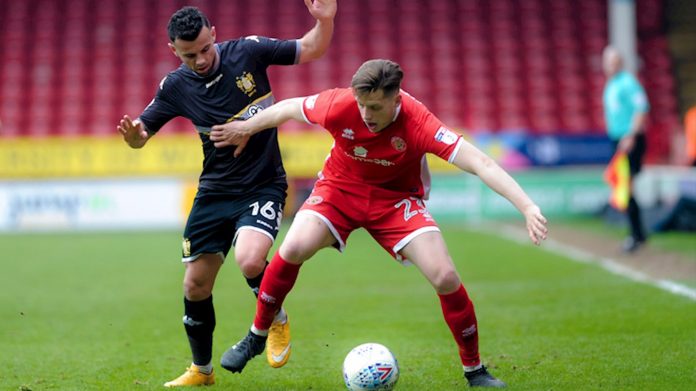 Bury seem certainties for the drop after being beaten 1-0 with a devastating own goal in the 89th minute of the game at the Banks’s Stadium at Walsall.

The Shakers had dominated possession in both halves and created the better chances in the second, but it was the Saddlers who clinched all three points.

Adam Thompson tried to clear Luke Leahy’s cross but instead managed to head the ball into the back of his own net securing all three points for the Saddlers.

With just five games left at thirteen points adrift at the bottom of the table, relegation for Ryan Lowe’s team could be confirmed this week.

Rochdale continued their battle for survival with a 3-3 draw with Portsmouth at the Crown Oil Arena.Dale took the lead three times in the game, but were held to a draw after an injury time own goal but the draw leaves them just a point from safety.

Oldham meanwhile are not out of danger. They drew 0-0 at Oxford United in a game that saw manager Richie Wellens heaped praise on his defensive line.

Defender Kean Bryan was forced off with injury in the opening 15 minutes of the game but that allowed second year youth scholar Tom Hamer to step up to the plate.

Alongside fellow academy graduate George Edmundson, the pair were composed at the back and kept the U’s at bay as Latics earned a point on the road.

At the other end of the table, Wigan continue to push for automatic promotion.Will Grigg’s hat-trick helped Latics on their way to an emphatic win over MK Dons at the DW Stadium.

After giving them an early lead, Grigg scored twice in the second-half after an Ethan Ebanks-Landell own goal and Nick Powell header had increased Latics’ advantage following Callum Brittain’s initial goal back for the visitors.

In the Championship, goals from Alex Pearce, Matej Vydra and Tom Lawrence consigned Bolton Wanderers to defeat at Pride Park.

The Rams scored twice inside the opening 45 minutes to put themselves in control of the clash, and while the Whites made a double attacking substitution at the break in response, Lawrence’s effort shortly after the restart made sure of the result for the home side.

Umbro asks Manchester What does Football mean to you?