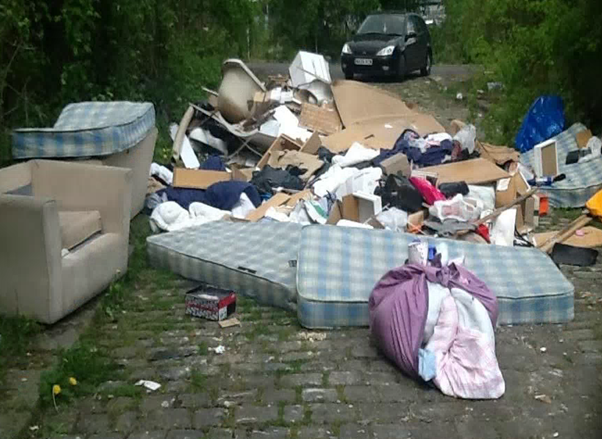 The amount of waste being fly-tipped across England each year could stretch from London to Moscow, new analysis by the Local Government Association reveals today.

The LGA, which represents more than 370 councils across England and Wales, is warning that the cost to taxpayers of clearing up fly-tipping rose to £57 million over the last year – a rise of 13 per cent.

Council leaders want the Government to help councils tackle this scourge, by introducing a scaled-up and speedier approach to punishing fly-tipping.

New analysis by the LGA into the nation’s fly-tipping crisis reveals that in 2016/17, there were 492,139 incidents of fly-tipping reported to be the size of a van or truck and if these vehicles were parked one behind the other, then the amount of waste would be able to circle the M25 twelve and a half times over.

The extent of the nation’s fly-tipping problem is revealed as councils call on the Government to “urgently streamline” the courts and prosecution process for offences, which are blighting communities up and down the country.

The LGA said it is good that the Government has recently allowed councils to apply fixed penalty notices to fly-tippers. However, council leaders say streamlining the process of prosecuting the worst offenders is essential if local authorities are to be able to recover the costs of prosecutions and truly tackle fly-tipping.

Currently, when taking offenders to court, councils have to cover the full cost of successful prosecutions, with fines resulting from these convictions being paid directly to the court, rather than the councils who have to clean up the mess.

Recovering costs through these fines is costly and can even take years, which often means councils end up making a net loss on every successful prosecution. With councils in England facing a funding shortfall that will exceed £5 billion by 2020, this is unsustainable.

“Fly-tipping is unsightly and unacceptable environmental vandalism. This new analysis shows the scale of the fly-tipping epidemic we face in this country. It’s an absolute disgrace for anyone to think that they can use the environments in which our residents live as a repository for litter.

“Councils are determined to protect local environments. New fixed penalty notice powers from the Government will help but every single conviction for more serious fly-tipping offences still results in council taxpayers having to pick up the bill.

“We need to make sure that when councils take offenders to court, a faster, more effective legal system ensures that serious fly-tipping offences result in hard-hitting fines.

“Manufacturers can also contribute, by providing more take-back services so people can hand in old furniture and mattresses when they buy new ones. Councils are determined to end the scourge of fly-tipping and always urge residents to report fly-tipping as soon as possible.”