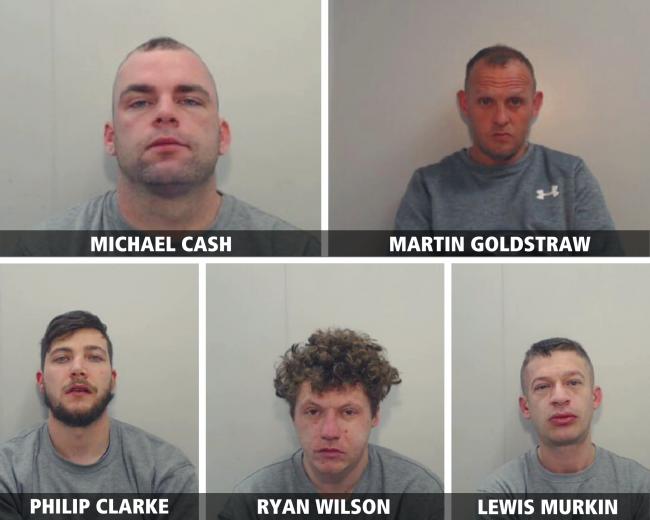 The sentences come after officers launched an investigation following a spree of cash machine explosion burglaries across areas of the North West – an investigation codenamed Operation Cass.

The group – all from the Stockport and Manchester areas – targeted 15 cash machines in Greater Manchester, as well as in other areas across Cheshire, Yorkshire and Wales.

Lewis Murkin, Philip Clarke, Ryan Wilson and Michael Cash used explosives to carry out the burglaries, while Martin Goldstraw’s role was to provide logistical support to the organised crime group- moving vehicles and equipment, and providing lifts to the offenders, prior to and following offences.

The men stole approximately £429,960 between March 2018 and February 2019. However, their spree was put to an abrupt end when officers arrested three of the gang as they were attempting to commit another burglary in Oldham.

Detective Sergeant Rick Castley, of GMP’s Serious and Organised Crime group, said: “The five men sentenced here today are a brazen group of criminals, whose greed and arrogance showed no bounds as they continued to commit offences across the country. The men chose to use explosives to carry out their crimes, which just goes to show their blatant disregard for the safety of others in their pursuit of illicit gains.

“The severity of their offences should not be underestimated and I want to stress the impact that these crimes have on our communities. Their actions caused substantial damage to business premises and significant inconvenience to business owners and the public, who often depend on the businesses and cash machines to make an honest living and go about their daily lives.

“I hope today’s result sends a clear message to other organised crime groups that we will not tolerate such offending in our communities, and will do all that is within our power to bring criminals to justice and make Greater Manchester a safer place. We will continue working with our partners, as well as specialists within the industry, to disrupt organised crime groups and put a stop to this type of offending.

“I would also like to take this opportunity to stress just how proud I am of the officers who have been involved in securing this result – including a dedicated team from GMP’s Serious and Organised Crime group. They have all played a vital role in what has been a painstaking and complex investigation, which has taken an audacious group of offenders off our streets for a considerable period of time.

Marc Terry, International Managing Director for Cardtronics, said: “Let these sentences be a warning for anyone out there contemplating an attack on our Secure ATMs. These results show that our Secure ATM initiative is exceptionally effective in helping the police track down, catch and send to jail those who attempt to attack Cardtronics machines. Our congratulations and thanks go to Greater Manchester Police for their excellent work in helping us to protect access to cash for local and rural communities, who rely on ATMs for basic banking services.

“Our work does not stop here – we are fighting to protect access to cash across the whole of the UK and will not rest until ATM crime is eradicated and ceases to be a threat to communities and their residents. Those considering an attack should think again, as they will be caught and sent to jail for a very long time.”