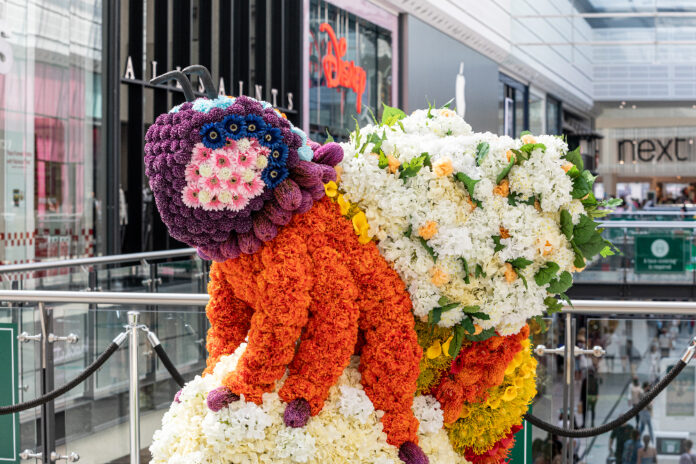 Manchester city centre shops and restaurants will be putting on a show fit for a Queen next month with the return of the city’s prestigious annual flower festival, The Manchester Flower Show.

Taking place over the four days of the Queen’s Platinum Jubilee Bank Holiday weekend (Thursday 2nd – Sunday 5th June 2022), city centre shops and businesses are transforming Manchester into a floral extravaganza featuring the most beautiful (and Instagrammable) gardens and flowers,

Headlining this year’s event is The Queen’s Jubilee Trail – 10 stunning professional displays located across the city centre inspired by the Queen’s 70 years of service, the Crown Jewels, the Changing of the Guard, the Queen’s love of horses and more.

The event, created by Manchester Business Improvement District on behalf of over 400 city centre retail and hospitality businesses, pays homage to the original Manchester Flower Show which began in 1955, but has been evolved to offer an urban take on its predecessor.

In addition to the Queen’s Jubilee Trail, visitors can expect fun and frivolity as they make their way through the city centre with floral installations popping up where they may not always expect! The city’s Exchange Square will be transformed into Flower Show Square in partnership with Selfridges Exchange Square, and will be home to the show’s main stage featuring entertainment, talks and live music, alongside pop-up food & drink. Plus there’s the Manchester Flower Show Cocktail Trail hosted by a selection of the city’s best bars and restaurants, a Harvey Nichols x Manchester Gin Bar on New Cathedral Street and a flower and craft market on Market Street,

Jane Sharrocks, Manchester Business Improvement District Chair and General Manager of Selfridges Exchange Square said: “The Manchester Flower Show is yet another example of our retail and hospitality sectors coming together to help build back the city post-pandemic. It demonstrates  creativity, collaboration and resilience and we’re incredibly grateful to all the artists, community groups, retailers and businesses who are playing their part to bring this beautiful event to our city to mark the Queen’s Platinum Jubilee.”

The Crown Jewels at Royal Exchange: One of the most beautiful flower displays you will see this summer, The Crown Jewels at Royal Exchange is an installation not to be missed! Created by Verdure Floral Design, visitors will be invited to sit on a royal throne surrounded by a profusion of fresh and dried flowers, where they can snap a photo and share on Instagram to be in with a chance of winning a £100 voucher from Verdure.

Horse Play at King Street: Celebrating the Queen’s love of horses, Twig Twisters have created a truly one-off display! Capturing a horse in motion, this sculpture has been made entirely of twisted willow and carefully created by popular artist, Sarah Haynes. With flower-filled drinking troughs at its base, this display is a playful celebration of horse racing and show jumping.

Changing the Guard at St Ann’s Square: Bringing London to the heart of Manchester, the Changing of the Guard will feature a Buckingham Palace inspired Guard’s Hut, Trafalgar Square lions, and a very British show of red, white, and blue flowers, all designed by popular Northern Quarter florist, FROG Flowers.

The Ju-Bee-Lee Garden sponsored by Prestige Flowers on Upper King Street: Celebrating the Manchester Bee as well as the Platinum Jubilee, this un-bee-lieveable pop-up garden created by The Manchester Flower Show community team and sponsored by online delivery service, Prestige Flowers, will be filled with an array of purple flowers including lupins, delphiniums, and lavender. With benches for visitors to relax and hexagonal planters in the shape of beehives, this garden will also feature both young and old silver birch trees, in reference to the passing of time. Each tree will be permanently planted after the flower festival has taken place as part of the Jubilee Green Canopy Scheme, which has seen thousands of new trees go into the ground across the country.

Queen of Pop at New Cathedral Street:  Designed by Crafthouse Creations and inspired by Andy Warhol’s 1960’s pop portraits of Her Majesty, the Queen of Pop installation will allow visitors to step back in time via a 1960’s Pop Art arch, where they will find planters and wheelbarrows overflowing with stunning summer flowers.

The Jubilee Kiosk at King Street: Did you know one of the Queen’s first acts as she ascended the throne was to modernise the humble telephone box? Making the perfect backdrop for your Instagram grid, FROG Flowers has paid homage to the traditional red telephone box in this eye-catching display located on King Street.

The Commonwealth Tuk-Tuk on New Cathedral Street: Paying tribute to all who name the Queen their head of state, this customised, retro tuk-tuk created by La Beau Fleurs and Birdie will be adorned with blue and purple flowers grown in Cheshire, making a nod to the Queen’s favourite colour (blue!) and the colour of nobility (purple!).

The Crown at Manchester Arndale: Designed by Decordia, visitors can discover a huge crown-shaped planter, filled with a colourful mix of tropical palms and jewel-like English flowers.

Queen Bee at Manchester Arndale: Located in the upper mall, this clever display has been created by Wild in Art by upcycling a bee sculpture from the previous Wild in Art Bee Trail across the city. Covered in artificial flowers, this installation will feature a beautiful, real flower crown designed by FROG Flowers.