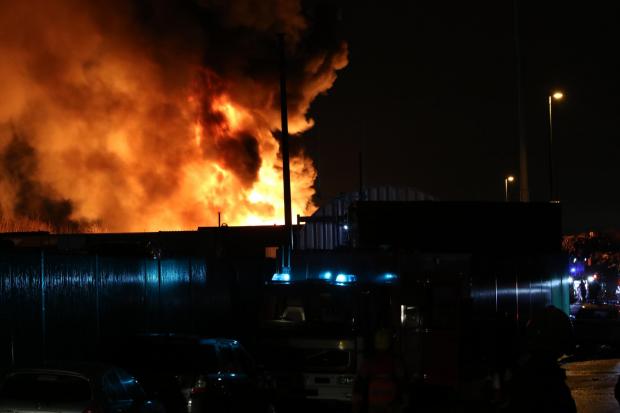 At its height, the fire which broke at around 6.30 yesterday evening, saw over 100 firefighters from Greater Manchester and Lancashire were at the scene.

One firefighter described the scene as apocalyptic

The fire at its height measured approximately 30 square metres by 15 metres high, involving a number of scrap vehicles.

Incident Commander Dave Baxter said: “Our hardworking and dedicated firefighters have done a fantastic job at getting this blaze under control.

“A big thanks goes to all of our partner agencies who have worked alongside us throughout this incident.

“Significant progress has been made throughout the night and we’re now scaling back this incident.

“A large number of fire engines remain at the scene and are likely to be there for the rest of the day.”

Residents in the local area who are affected by the smoke should continue to stay indoors, keep their windows and doors shut and avoid the area where possible.

Some road closures are in place around the incident including Rochdale Road between Heywood Street and Wash Lane. Traffic is diverting via Wash Lane.

Motorist who are travelling through the smoke are urged to keep their windows and air vents closed.

Group Manager, Val Hussain, who is in charge of the incident praises firefighters for their hard work: “Our crews are doing a great job prevent the fire from spending despite the challenging conditions they’re being faced with.”