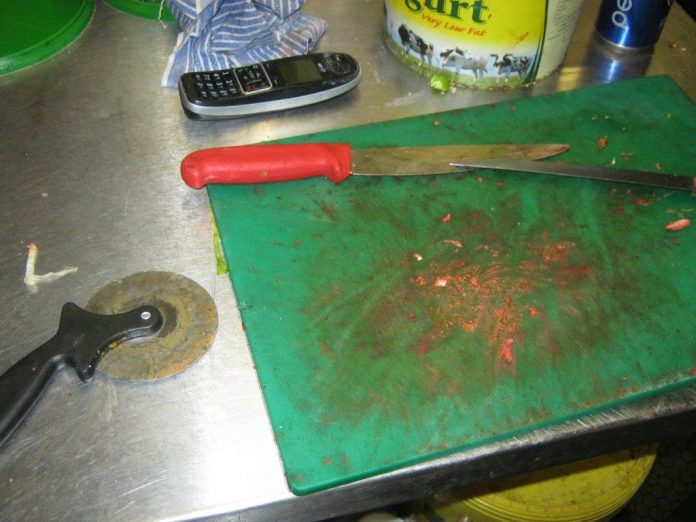 Oldham Council has successfully prosecuted the former owner of a filthy takeaway – nearly three years after his premises were originally inspected.

The case was brought against Faisal Mahmood after Environmental Health officers visited Burgerlicious, Greenacres Road, on May 18, 2015.

During their visit officers found plastic food containers were dirty and stained with food splashes. A pizza cutting wheel was heavily contaminated with old encrusted grease and food debris.

Utensils, including knives, a peeler and a sieve were found in a container lined with thick black sludge.  A wrap machine was covered with dirt and grease.  The green chopping board in use at the time of the inspection was exceptionally dirty.

In the pizza topping fridge a large amount of water was pooling on the base of the unit and there was food debris floating around in the stagnant water.  Food was still being stored inside this fridge, including in the ponding water.

A chest freezer lid was badly cracked and was held together with masking tape and the rear yard of the food business was overflowing with food containers, cardboard boxes, builders’ rubble and approximately 20 black bags filled with waste.

Mahmood subsequently failed to turn up for an interview under caution and his court date.A warrant was issued for his arrest and he was arrested last year and bailed.

Mahmood, who no longer owns the business or has any involvement in it, was fined a total of £800, plus a victim surcharge of £80 and ordered to pay the council costs of £2,050.

The premises closed as a takeaway and has recently reopened as a shop.

Hydration myths may be putting older people’s health at risk