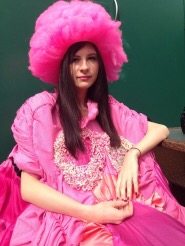 RECENT graduate from Manchester Metropolitan University was named Young Designer of the Year 2015 at The Clothes Show held in Birmingham last week.
Rebecca Carrington created a ready to wear garment for a top fashion blogger inspired by the Tokyo fashion scene that impressed judges.

Having visited Tokyo for the first time a couple of years ago, Rebecca said: “I was in awe of the way Japanese girls and women dressed to be ‘cute’. In Britain, we often opt for clothes that are more sophisticated as we grow up but that wasn’t the case in Japan so I felt inspired.

“I wanted to blend objects with clothing and in Japan there were all these little trinkets. When I came across a doll key ring, I decided to use key rings as a way of connecting the trinkets I was inspired by onto the clothing.”

Rebecca’s final piece was modelled on the catwalk at the annual retail event, which includes stalls from designers, beauty demonstrations, music performances and fashion shows.

On winning, the young designer said: “When they said my name I was in complete shock, I never thought I would have won. Most of all I am grateful that my design was recognised and supported by people in the fashion industry and it was really exciting for me to see my work on the catwalk again.”

Earlier this year, Rebecca’s clothing collection also won the £5,000 gold prize at the Phoenix Cup fashion Competition held in China: “It was an amazing opportunity winning an international competition. I got to go to the city of Ningbo with two of my classmates, share my work and meet other designers.”

Joe McCullagh, Head of Design and Associate Dean for Learning and Teaching at the Manchester School of Art, said: “We are all absolutely delighted for Rebecca on her awards this year – both are highly acclaimed and internationally recognised and a testament to Rebecca’s hard work.”