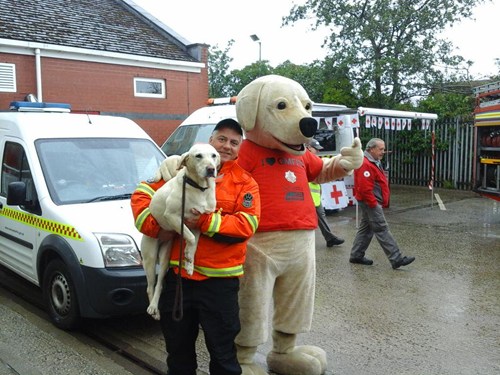 Greater Manchester’s Fire Dog Lucy, codename Cracker, is hanging up her protective boots for the last time this week.

After a decade serving communities across Greater Manchester, Lucy is heading into a well-deserved retirement.

Throughout her time with Greater Manchester Fire and Rescue Service (GMFRS) she played a part in many investigations and assisted with several successful imprisonments.

Lucy was indispensable one summer’s day in 2009 when she found a key piece of evidence in an investigation into a suspected arsonist.

She had been let loose on a large search area and after an hour searching, negotiated a river and indicated there was something hidden in a row of trees and thick brambles.

Mike Dewar, GMFRS Dog Unit Manager, said: “Lucy started to pull vigorously so I decided to let her off the lead to investigate.

“She ran full speed towards some brambles that would have been inaccessible for a person and became entangled.

“As I rushed to try and free her I noticed something black in the brambles. It was a backpack that contained a tin petrol can.

“This was later used as a key piece of evidence to prosecute the arsonist.”

In March 2010 Lucy was requested by the police to investigate a large area during an English Defence League rally.

It was believed a large cache of petrol bombs had been hidden ready for deployment with the intent to turn the protest violent.

Mike said: “The search area was quite large, but Lucy didn’t seem daunted by this. She didn’t seem bothered by the hot weather either.

“After meticulously searching in the undercover, plain-clothed operation, we concluded that the area was safe. The protest was allowed to continue thanks to Lucy’s phenomenal efforts to ensure the safety of the public.”

Lucy has been involved in a number of high-profile cases over the years, including arson, serious assault and even murder.

One incident which stands out took place in Ashton-Under-Lyne, where a man had been murdered and set on fire.

Lucy, dressed in a forensic dog suit to ensure evidence was preserved, undertook a number of searches over a two day period.

As a result of her efforts during this multi-agency exercise, the suspect received a 30 year jail term.

Mike added: “Lucy has served consistently to the best of her ability and far beyond what we anticipated or expected of her.

“Eric has some enormous shoes to fill. As our official mascot she has been universally adored by the public and staff alike, and as a fire dog she has been an asset to GMFRS and will be greatly missed.”