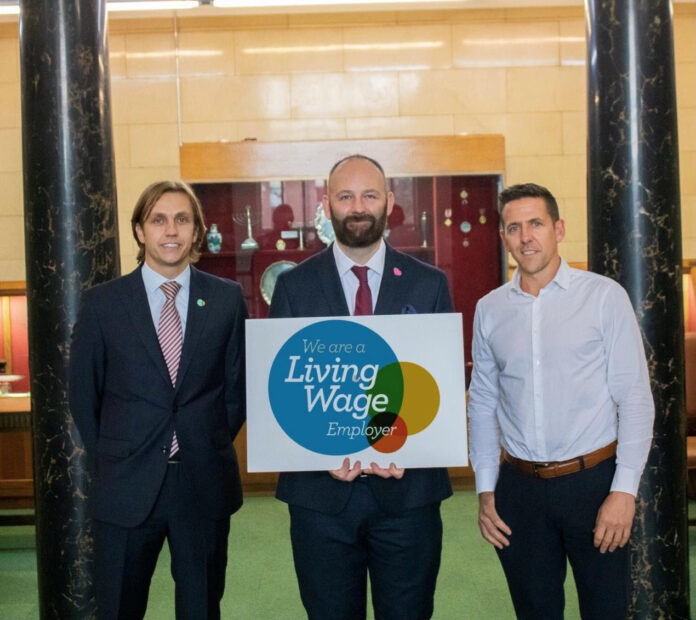 Salford is celebrating beating its target to become England’s first Living Wage City as the campaign celebrates 20 years of existence.

The Salford Living Wage Action Group launched the campaign in 2019 with 38 accredited employers and aimed to see that rise to 62 by the end of 2021. Accredited employers not only pay their staff the real Living Wage, which is calculated to meet the true cost of living but also commit to raising it each year and encouraging their supply chain to follow suit.

Business interiors suppliers Jenkinson’s and building contractors Schofield and Sons have joined 66 other accredited employers in the city – bringing the total to 68 as the city prepares to celebrate national Living Wage Week next week (November 15-21).

Salford City Mayor Paul Dennett said: “Salford was the first place in England to be recognised for its ambition to become a Living Wage City and as a council we are being proactive in raising standards in procurement to get the best value for people in Salford.

“Councillor Jack Youd holds a new Executive Support Social Value and Procurement role which was created to push forward this agenda. These are the first two new living wage employers to be achieved through this new role and I’m sure Councillor Youd will be successful in securing more.

“We now need more businesses to follow their lead. Paying staff the real Living Wage, which is calculated to meet actual living costs, makes employees feel truly valued. It boosts morale and motivation, helps them focus on their job and that raises productivity. It also helps businesses retain and recruit staff, cutting costs and making them more efficient and profitable.”

Jenkinson’s is one of the country’s leading independent business interiors providers in the north west.

And Schofield and Sons are building contractors based in Monton, Eccles which has been established in Salford for two generations. They have recently been awarded the contract for the restoration works at Buile Hill Mansion as part of the redevelopment works.

The real Living Wage is an hourly rate set independently and updated annually. It is currently set at £9.50 per hour – with a London rate of £10.85. The UK minimum wage is 8.36 per hour.

The real Living Wage is calculated by the Resolution Foundation and overseen by the Living Wage Commission, based on the best available evidence about living standards. It is based on detailed research of what households need in order to have a minimum acceptable standard of living and is an hourly rate set independently and updated annually.