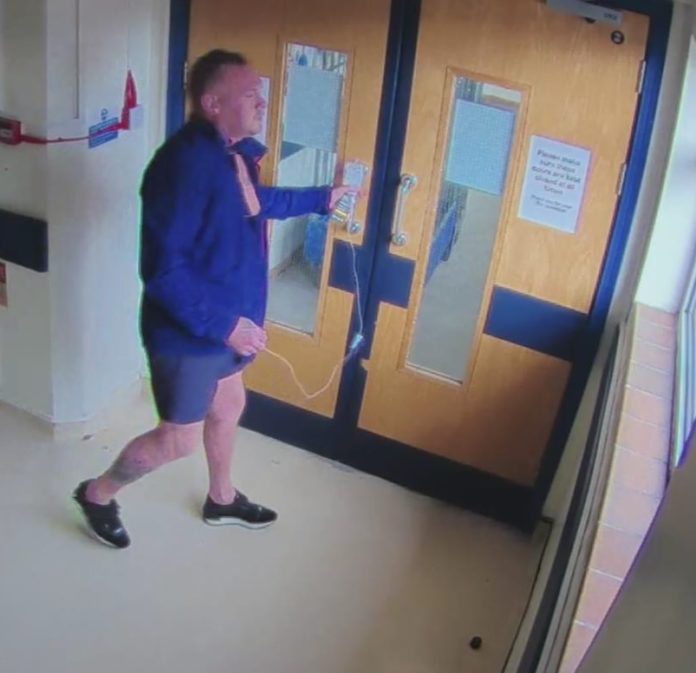 A Brinnington man who evaded arrest by fleeing from hospital with a drip still attached has been jailed for drug offences.

In March 2018, three people, including Beren Marshall,37 of Harcourt Street, Stockport, were jailed for more than 17 years after orchestrating a drugs operation to deliver cash and cocaine across the country.

What was not reported at the time was that Marshall realised police were closing in on him and made arrangements to hand his drug business over to Paul Johnson,42 of Gowerdale Road, Stockport, who was jailed today at Manchester Crown Court, Crown Square to nine years and two months.

The handover consisted of a number of meetings between the two and, once Marshall was behind bars and not in South America as he had planned, Johnson – who was well known in the Brinnington area – filled his shoes as the crime boss, arranging and directing multi-kilogram deals of Class A drugs.

In the past, officers were able to track the movements of Nathan Menzies ,38 of Ambleside Road, Stockport – to the Durham area, where it transpired he had been meeting recently released drugs convict Ian Coates ,42,of Woodlands View, Durham.

Coates, who mouthed ‘I’ll be back’ when he was sentenced at Newcastle Crown Court, was released from prison in June 2017 and went straight back to his old ways; exchanging cash for the delivery of Class A drugs but, with Menzies in cuffs, his next delivery was in jeopardy.

At the helm, Johnson ordered Chris Booth ,56 of Blackberry Lane, Stockport to fill the role and, before long, he was making the 140-mile round trip to West Rainton in his red Volvo C30. It’s thought that he carried out the six-hour journey 10 times before being stopped by motorway police on the A1 northbound.

As part of the routine stop, a kilogram of high purity cocaine was discovered in a shoe box in the boot of the car, resulting in his arrest.

Stephen Moore,32 of no fixed address and his driver, Gareth Ridgeway,31,of Alamein Drive, Stockport, were arrested together and both recalled to prison, having been on license.

Ridgeway would often ferry Moore – who didn’t have a driver’s licence – around the country but after Booth’s arrest, they became the duo who kept Johnson’s drug business alive by making the trips to Durham. Another routine stop by road policing officers saw them arrested after 1.5kg of cocaine was found on board Ridgeway’s Volkswagen Passat.

A month before the final arrests, a motorcycle stuffed with £43,000 was intercepted on its way to Johnson who was due to collect it in Stockport.

Linked to Coates, it was the final piece of evidence officers needed to close in on the gang but as they forced entry to Johnson’s house, they discovered he wasn’t there.

Before being able to make their way to Stepping Hill Hospital, where Johnson had been admitted, he had swiftly made his exit in his boxer shorts and jacket with his drip still attached.

During the court case, the prosecution presented the fact that there were many more kilograms of Class A drugs ferried around the country by Booth, Moore and Ridgeway than the 2.5 kilograms worth that had been recovered by officers.

All of the defendants pleaded guilty and have today, Monday 18 March 2019, been jailed for more than 30 years.

Superintendent Emma Taylor, of GMP’s Stockport District, said: “Those in the Brinnington area will know of Paul Johnson and the harm that he has caused to the local area so I’m very pleased to say that today, we can certainly say he will be in prison and away from our area for a long time.

“Despite their predecessors having been locked up already, Johnson and his accomplices clearly didn’t get the message and carried on trying to make as much money as possible by ploughing Class A drugs as far and as wide as they could.

“The work our specialist colleagues in the Serious and Organised Crime Group have done to secure these convictions could not be done without the help of people living in the areas where these type of offenders operate.

“Our work does not stop here. We need you to help us build a true picture of crime in your neighbourhood, help us gather as much evidence as we can so we can put a stop to these people who ultimately cause harm to the most vulnerable people in our society.”