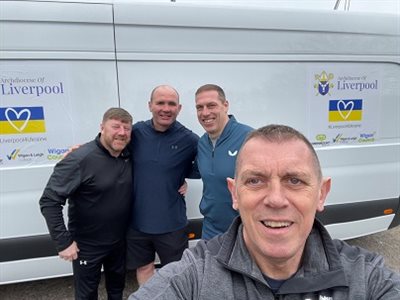 Two 7.5 tonne vans filled with donations from generous Wigan Borough residents are currently travelling over 1,000 miles and through six countries to reach the Poland border to help those affected by the war in Ukraine.

The team behind the wheel is made up of representatives from Wigan Council, the Archdiocese of Liverpool, Wigan and Leigh College and Greenmount Projects.

Dave Lyon, Wigan Council’s assistant director for housing and environment is one of those making the mammoth journey.

He said: “It is a privilege to be able to, along with Wigan and Leigh College, Greenmount Projects and the Archdiocese of Liverpool, deliver the donations received from residents across the borough and the North West to the Poland border.

“The generosity shown by Wigan Borough residents is really inspiring and I am proud to play my own part in it.

“It is a long journey, but nothing compared to the experiences of those fleeing war.”

The drive came about after the Archbishop of Liverpool, the Most Reverend Malcolm McMahon OP, called on people who live in the Archdiocese (which includes Wigan Borough) to donate essential items to help people in Ukraine.

In addition to delivering vital donations, the team have opened a JustGiving page to collect financial donations to help those affected by the conflict.

Wigan Council’s chief executive, Alison McKenzie-Folan, added: “I know that communities across Wigan Borough have watched the appalling situation unfolding in Ukraine with upset and horror and that some of our residents are directly affected.

“The experience shone a light on how our residents and staff embody our value of ‘be kind’ and our residents have done so much to help those facing the devastating impact of the war.

“We are so proud of how our communities have pulled together to make these donations and also proud of Dave for joining the team delivering these goods to those fleeing the conflict to neighbouring countries.”

On their first day the team travelled 580 miles through England, France, Belgium and the Netherlands.

They are currently making their way through Germany and are due to arrive in Poland on Tuesday, where they hope to meet the auxiliary bishop of the Ukrainian Catholic Eparchy of Sambir-Drohobych in Lviv, Gregory Komar.