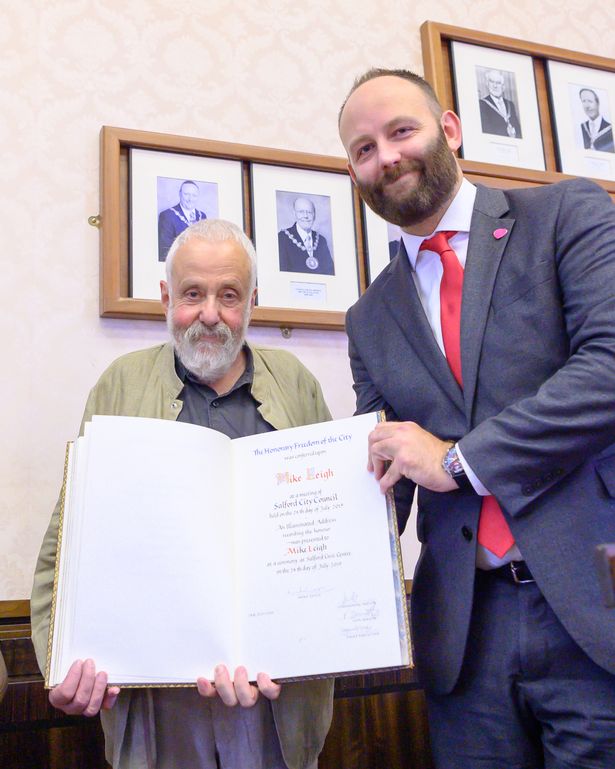 Salford-born film maker, writer and director Mike Leigh, who produced this year’s Peterloo blockbuster, has been awarded the Freedom of the City of Salford.

Mr Leigh has been awarded the honour for his internationally recognised achievements in cinema and his decades-long contribution to popular British culture in representing northern working class voices.

His gritty cinematic style draws on memories and locations from his childhood and captures the reality of everyday working class life.

“The Freedom of Salford recognises people with strong links with Salford who have made an outstanding contribution to the city and promoted it through their national or international prominence. Mr Leigh is a worthy candidate,” he said.

City Mayor Paul Dennett also congratulated Mr Leigh and added:  “Throughout his career, the legacy of his Salford upbringing has permeated his work in the sometimes bleak but always heartfelt and humane depictions of working class life.

“Mr Leigh’s work is an honour to Salford and its proud history of working class culture. He is part of a long line of creative talent from this city, from artists L.S. Lowry and Harold Riley to singer Ewan Maccoll, and writers Walter Greenwood and Shelagh Delaney and more.”

Mr Leigh, grew up in Great Cheetham Street, Broughton where his father was a GP. He attended North Grecian Street Primary School in Lower Broughton, before attending Salford Grammar school.

Mr Leigh’s first BBC television film Hard Labour was filmed entirely in Salford in 1973, using memories and locations from his childhood. Vera Drake, highlighting the struggles faced by women seeking illegal abortions, was inspired by his experiences growing up in Salford – and his recent blockbuster Peterloo captures the history of working class struggle for the vote in Salford and Manchester.

Mr Leigh, has a full list of international accolades for his work including five BAFTA awards, two British Independent film awards and a Palme D’Or award in 1996 for Secrets and Lies. In 1993 he won Best director at Cannes for his film Naked. In 1991 he was awarded an honorary degree by the University of Salford.