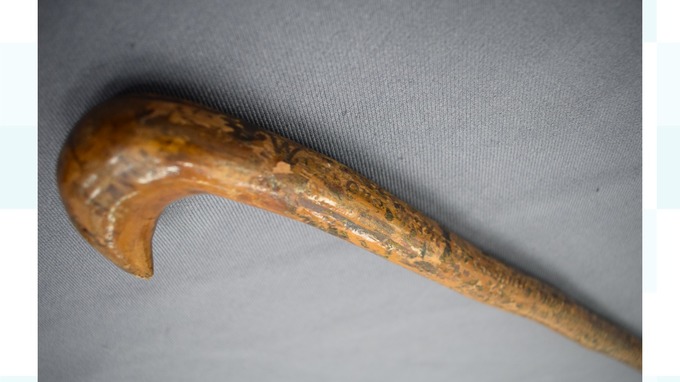 Friday 19 July 2019 will see a very rare Peterloo artefact will go on display at People’s History Museum (PHM), known as the Peterloo cane.

This will be the first time that the piece has been on public display, and is one of the few items to have witnessed what took place in Manchester on 16 August 1819, when a protest by 60,000 working people for rights and representation turned into an event that saw loss of lives and the injury of hundreds. The Peterloo cane, whilst simple in design, is highly symbolic in significance.

The Peterloo cane has been donated by the family of Charles Worsley, who is known at the time of Peterloo to have lived in the Withington area of south Manchester and to have worked in the highly skilled trade of joinery, employing up to six people. It is believed that Charles Worsley was at Peterloo as a protestor and dressed, like so many others, in his Sunday best with the walking cane a part of his attire, as was the fashion of the time.

The Peterloo cane carries both inscriptions and inked drawings. Whilst some of the words are more difficult to decipher, quite clearly are the words “be brought to Justice” and a number of names, including “HUNT”. Also clearly distinguishable it says “I was one of the dreadfull (sic) bludgeons seen on the plains of PETERLOO”.

From the work carried out by People’s History Museum, which included magnification techniques and the use of ultra violet light, it is believed that whilst the writing was added after the events of 16 August 1819, the drawings were done ahead of the protest. Of those that particularly stand out, are two caps of liberty and a flag flying.

Sam Jenkins, Collections Officer at People’s History Museum, says “Observers said one in ten of the protestors at Peterloo carried a walking stick or cane, similar to this object, which subsequently led to accusations that they were armed. We believe the inscription to have been a satirical response to the exaggerated claims that the protestors carried weapons.”

The Peterloo cane has been passed through the generations of the Worsley family, with the donation being made to People’s History Museum by Charles Worsley’s four times great grandson. It will be displayed as part of the exhibition Disrupt? Peterloo and Protest (until 23 February 2020) which is supported by The National Lottery Heritage Fund. Like all the objects assembled it helps to tell the story of events that unfolded 200 years ago at the Peterloo Massacre, making it important to the nation’s history and the story behind the evolution of democracy.

Dr Shirin Hirsh, Researcher at People’s History Museum, says, “Despite the scale of the Peterloo Massacre both in numbers and in impact, there are relatively few artefacts remaining. This is in part because this was a distinctly working class chapter of history, and in part because the clamp down by the authorities that followed meant that anything related to the event was often hidden or destroyed for fear of the repercussions. This is why the Peterloo cane is such a vital piece of history, as something that directly links to one of those who gathered 200 years ago to demand representation and rights of equality at a time when working people had none.”

During 2019 People’s History Museum is exploring the past, present and future of protest throughout its galleries, exhibitions and events programme. The museum’s programme of summer activities for families, its community exhibitions and its current display of banners all illuminate these themes for visitors.

Travel disruption for Manchester over the Easter weekend