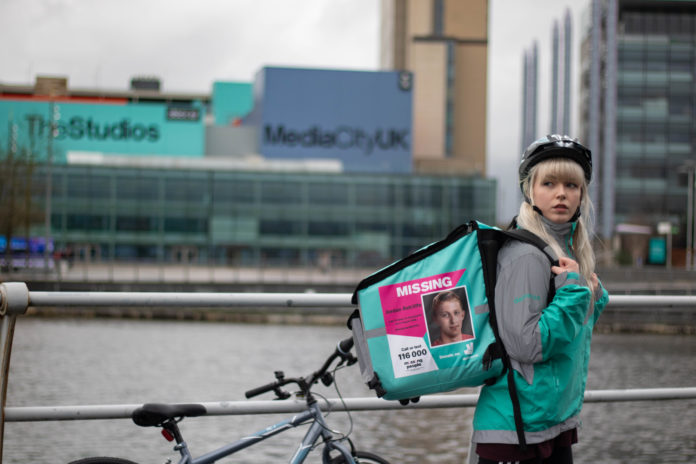 Deliveroo will work with its Manchester riders to help find those missing during the lead up to Mother’s Day in partnership with Missing People, the UK’s only charity dedicated to the search for missing people nationally.

After the success of finding five missing people during the Ride to Find campaign in winter 2018, Deliveroo is increasing the number of locations across the UK in a bid to reunite families in time for Mother’s Day.

Beginning on Friday 28th February, Deliveroo will be visiting each designated city (Birmingham, Brighton, Cardiff, London and Manchester) to meet riders and supply them with material that will enable them to raise awareness; by featuring the faces of missing people on their backpacks. Deliveroo’s riders will be deployed in areas close to the last known sighting of the missing people they are showcasing on their backpacks.

Someone is reported missing every 90 seconds in the UK. 80% are found within 24 hours but one in five cases takes longer. If someone goes missing for more than a week, their chances of being found reduces dramatically. For these people, every second counts and the more people who see pictures of the missing person, the greater the chance that they are found. Together, Missing People and Deliveroo will raise awareness of vulnerable missing people, encouraging communities to join the search and bring people to safety.

To further increase the force of the search, every single rider in Deliveroo’s 30,000+ fleet will be encouraged by the company to sign up to receive Missing People’s Child Rescue text alerts, which notify people whenever a child in their area disappears making this the charity’s largest direct marketing campaign to help find missing children to date.

Missing People provides free and confidential support by phone, text or email 24 hours a day, 365 days a year to anyone affected by a disappearance. As a charity, Missing People is reliant on donations to provide this support. To help raise donations, Deliveroo has specially designed a Missing People donation restaurant within its app, named ‘Ride to Find’ where customers can choose to donate from £3.50 to £1,000.

Will Shu, CEO and Deliveroo’s first ever rider said: “Working with Missing People in 2018 is something we are genuinely proud of at Deliveroo. It also, very quickly, became clear that this partnership was something riders felt very passionate about being part of.

So, this year we are dedicated to working closer with our riders and providing more Missing People posters for them to wear.

I sincerely hope that partnering for a second time means we help to find more missing people as well as continue to raise awareness across the country.”

Jo Youle, CEO at Missing People said: “We are delighted to be partnering with Deliveroo again to publicise the appeals for missing people from all around the UK. This campaign is such a brilliant way of raising awareness in local communities, both of the issues involved in missing, and the 186,000 people who go missing every year in the UK. That is one person every 90 seconds.

Missing People provides support for those who are missing, children and adults thinking of going missing and the families left behind, through our free helpline and our support services, and we also appeal for those who have disappeared.

“Last year five people featured in the Ride to Find campaign were found, which was fantastic. We are hoping that we will be even more successful this time.”

If anyone has any information on any of the appeals featured in the Ride to Find campaign, they should contact Missing People anonymously by calling 116 000 or by emailing 116000@missingpeople.org.uk or call the police on 101.

To make a donation to Missing People visit the app here.

Academic packs a punch to raise money for children’s unit

A brand new Ziferblat has opened in Manchester