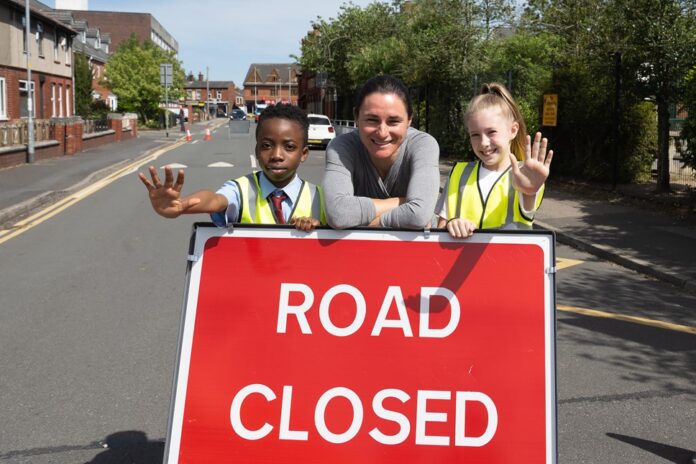 Across GM, around 30% of trips under 1km are made in a car, with 84% of school runs being under 1-mile. That’s the equivalent of a four-minute bike ride or a 15-minute walk.

The aim of the School Streets scheme is to help create a pleasant, child-friendly, safe environment, which prioritises active travel over driving, enabling children to breathe cleaner air on the school run.

In most cases, a School Streets project consists of a traffic regulation order and related signage, but the programme isn’t a one-size-fits-all approach. Each School Street scheme is unique to their community and the needs of the school, with each district set to adapt its measures accordingly.

Although School Streets aim to discourage vehicular access at drop off and pick-up times during term time, local authorities have stressed that residents’ cars, local businesses, blue badge holders, as well as the emergency services can still maintain access to the streets.

Thousands of pupils will directly benefit, with more schemes to be launched throughout 2022/23 across the city-region.

The new schemes will form part of The Bee Network, GM’s vision to deliver an integrated transport system that connects all forms of public transport, including cycling and walking.

Active travel is a vital part of the Bee Network, enabling more people to travel sustainably for everyday trips or as part of a longer journey using public transport, and will contribute to GM’s ambitious plan to become carbon neutral by 2038.

Projections show that if all Greater Manchester car journeys of less than one kilometre were walked or cycled, it would prevent at least 42,750 tonnes of carbon dioxide entering the atmosphere – a saving that’s equivalent to planting 21 million new trees in just one year.

“A School Street not only transforms the school run by making it safer for children to walk, scoot or cycle to school, it also supports a healthier lifestyle and develops sustainable travel habits from a young age.

“Children love to be active and starting the day with a blast of fresh air and some fun, in a safe environment is essential, and I’m delighted we’ve had such a committed response from schools in Wigan Borough – with many more GM School Streets on the way.

“It’s an important step towards enabling more people to choose to leave the car behind, especially when travelling for shorter journeys.”

“The children and staff at both Sacred Heart Catholic primary school and Leigh Central primary school are certainly walking the walk when it comes to improving air quality locally.

“We’re really pleased to see these efforts being made to create a greener Borough, where the children can grow up breathing safe, clean air.”

Ecclestone to star in new drama to be made in Manchester

Stay clear of the Mancunian Way this weekend