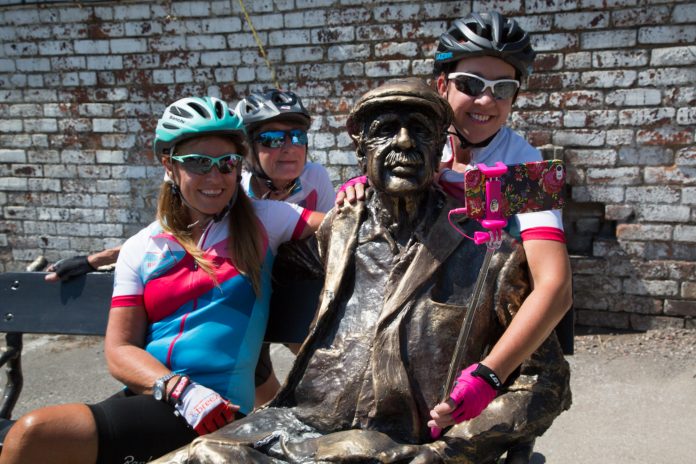 A crowd-funding bid has been launched to raise £17,950 for an iconic Manchester sculpture damaged by vandals.

The sculpture At the End of the Day has been admired and enjoyed by generations of local people in Irlam (& Cadishead) since it was created by a very talented schoolboy 40 years ago this year.

The full-scale replica of a man in a flat cap relaxing on a bench was restored in 2016 and took pride of place on a platform at the refurbished Irlam Station House, where it won a new audience of commuters and visitors, many keen to take a selfie with it.

Following vandalism, the statue was moved to safe storage. Campaigners want to mark its 40th anniversary by raising enough money to recreate it, ideally in bronze so that it will be enjoyed outside for several more decades, and restore it to its rightful place at the Station House.

In 1978, Simon Law made At the End of the Day for his O-Level art exams, creating it from clay, plaster of Paris, mesh and cloth, with a metallic paint coating finish

Then aged 15, the Irlam school pupil was an aspiring sculptor – one of his other creations, a bust of Ena Sharples actress Violet Carson, was bought by Granada Studios.

Simon, now a senior design manager for John Sisk and Son, said: “I was very pleased with the way the sculpture came out, but I never expected it to be around for another 40 years.

“It looked perfect at the station, like it was waiting for the next train. Passengers saw it every day. It was like a local celebrity.

“I was devastated when I heard what the vandals had done to it, devastated. If we can recast it into bronze and make him more robust, that would be astounding.”

The sculpture – also known locally as The Man on the Bench – was on proud display at Irlam High, for years before it had to be rehoused due to school refurbishments.

Irlam charity the Hamilton Davies Trust (HDT) became guardians of the statue and funded its restoration in a project which took over 140 hours. It then took pride of place at Irlam Station.

Often thought to represent a tired shift-worker from the town’s now defunct steelworks, it has come to symbolise the regeneration of Irlam’s Station House from a run-down building into a vibrant community hub.

In 2017, vandals broke off the statue’s leg, leaving the sculpture looking dented and bashed about.

HDT is now leading the new appeal to make the statue stronger than ever. It has also submitted a funding request to The Arts Council.

Mandy Coleman, Consultant General Manager of HDT, said: “At the End of the Day is an incredible piece of art. It looks like it was created by a well-known professional artist, rather than a talented schoolboy.

“Generations of local people have loved it and then it got a whole new fan club at the Station House. It has become a kind of symbol of both Irlam’s past and how the area is being regenerated.

“Everyone was shocked and disappointed when it was vandalised. To mark its birthday, we want to recast it in bronze ideally, so it will survive for years to come.”

Donations can be made on the appeal page: www.gofundme.com/manonthebench