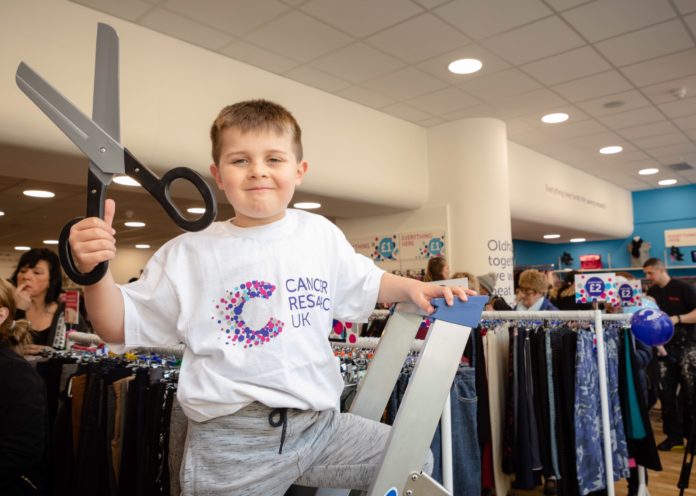 The new shop will offer quality adults and children’s clothing and accessories, books media and homeware for £3 or less. All profits will support Cancer Research UK’s life-saving research.

Corey from Limeside, who was treated for acute lymphoblastic leukaemia – a cancer of the white blood cells, had to learn to walk again following treatment,

The youngster, who attends Holy Family RC Primary School, was diagnosed with ALL in 2016.

Lynn-Marie and Corey’s dad Mark Ashton, received the devastating news Corey had cancer after Lynne-Marie took him to A&E at Oldham Royal Infirmary when a high temperature and persistent cough failed to go away. Corey was initially diagnosed with pneumonia but then routine blood tests showed he also had leukaemia.

He was given an immediate blood and platelets transfusion and had to spend the next 13 weeks in hospital, fighting the pneumonia and receiving intensive chemotherapy.

Corey’s treatment also involved many lumbar procedures, including some where chemotherapy drugs were injected directly into his spine, carried out under general anaesthetic.

Manchester City fan Corey, who has a big brother called Tyler, responded well to his treatment and is now on a maintenance oral-administered chemotherapy which he will need to take until this coming summer.

Sadly, Corey’s treatment caused a number of side effects and as well as losing his hair, he also became so weak from being bed-ridden that he needed physiotherapy to learn to walk again.

However, he is currently doing well and is excited as mum Lynn-Marie, aged 33, recently gave birth to a baby girl called Paisley.

Lynn-Marie, who volunteers at her sons’ primary school, said: “We are thrilled that Corey opened the new shop. He was so excited about cutting the ribbon!

“Corey might not be here today if it wasn’t for research and we are so proud to play a part in supporting the charity’s vital work.”

Cancer survival rates have doubled since the 1970s and Cancer Research UK’s work has been at the heart of that progress. But more funds and more supporters are needed to bring forward the day when all cancers are cured.

Cancer Research UK’s life-saving work relies on the public’s support. Thanks to the generosity of its supporters, the charity was able to spend over £28 million last year in the North West on some of the UK’s leading scientific and clinical research.