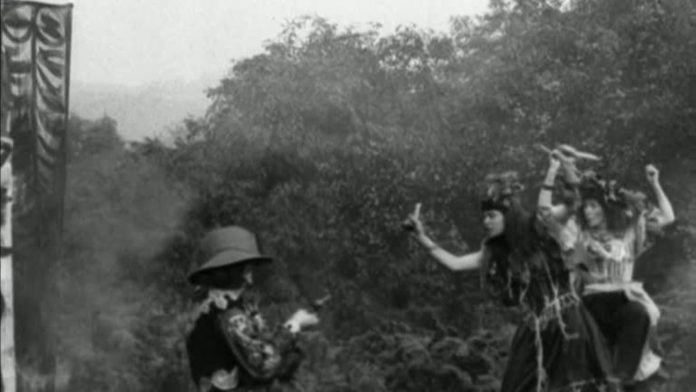 British Textile Biennial artist in residence Jamie Holman weaves together a story where the young James Mitchell meets cowboys in Blackburn during the cotton famine, Abraham Lincoln sends gifts of food to Blackburn, and a small group of weavers change the world, accidentally inventing Hollywood in the process.

Commissioned by Blackburn’s Townscape Heritage Project, a banner parade and special screening will take place in the historic heart of Blackburn at ‘High Noon’ on Saturday 2 November 2019.

The event will celebrate the legacy of pioneer film makers Mitchell and Kenyon and their Norden Films company that operated in the town from 40 Northgate. In 1899 Mitchell and Kenyon produced “Kidnapping by Indians”, a film that is now recognised as the first Western ever made. This rarely seen film will be shown with four others in Blackburn’s historic Cotton Exchange, where the cotton weavers gathered in 1865 and which became a cinema in 1919.

Held in a private collection, the following films – Kidnap by Indians, The Tramps and the Artist, Diving Lucy, A Tragic Elopement, and The Poacher’s Revenge – will be shown publicly for the first time.

The parade will start at Mitchell and Kenyon’s base at 40 Northgate, where the films where re-discovered in 1994, and close to Holman’s studio. There will also be live performance elements on the parade and during the screening with a Western re-enactment by 25 performers plus British Folklore performers. As part of the event, hot bean stew with flat bread will be served for free. The food references the three ships of aid that Abraham Lincoln sent to the Lancashire weavers after their support for the North and rejection of the Confederacy.

As part of his ongoing research as British Textile Biennial artist in residence, Holman viewed outtakes from the first Western at the BFI.

It led him to explore whether this was the first Western to be made. During the US Civil War, the Confederacy toured the north of England, petitioning weavers to support the blockade and the Southern states. Had they been successful, the war may have been lost by President Lincoln.

The first meeting was in Blackburn, with the momentum from the Blackburn meeting travelling to Stalybridge then on to Manchester where several thousands of workers gathered at the Free Trade Hall to declare their support for the Union’s emancipation of the slaves. Holman’s proposition is that this encounter with the ‘Wild West’ would manifest in the first Western being made in Blackburn a short time later.