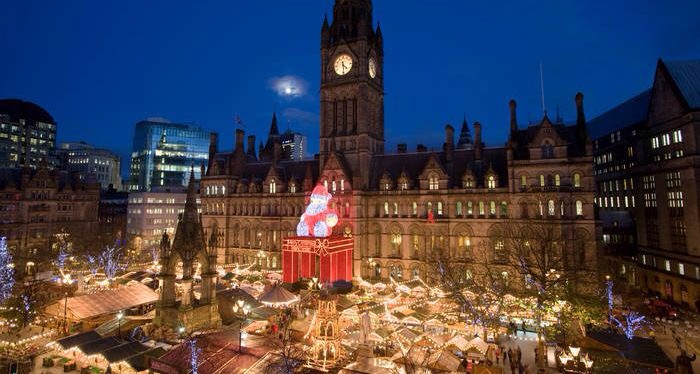 The acts and performers for this year’s Christmas Lights switch-on have been confirmed and 2015 looks to be one of the biggest parties yet.
Filling Albert Square with and audience of thousands, Manchester’s switch-on celebration is one of the biggest in the UK and will feature some incredible performances from some of the most exciting acts in music and entertainment.
Manchester’s festive celebrations will officially begin on Saturday, 7 November from 7pm until 8pm with an evening of high-energy entertainment in partnership with Key 103.
Coronation Street star, Catherine Tyldesley, will perform a musical number and will call on some special friends – including another favourite, Kym Marsh – from the world-famous soap to help her with the honour of pressing the button on Manchester’s Christmas lights.
Heading up the musical performances, indie-pop favourites Scouting for Girls with their first new album in three years – ‘Still Thinking About You’ – released this week and a back catalogue of hit singles including the No1 ‘This Aint A Love Song’, head to Manchester in advance of their latest UK tour and will show why they remain one of the UK’s top live acts.
UK R&B singer-songwriter, Lemar – two time Brit award winner and three time MOBO winner who has sold over 2 million albums and had 7 top ten hits – has just released a new album ‘The Letter’ and the Manchester Christmas Lights Switch-on will be one of the best opportunities for people to see one of the most distinctive voices of the last decade.
Alongside these headline acts, the city’s festive theatre productions will bring a slice of Broadway to the occasion.
The stars of Manchester’s festive theatre season will be out in force, including cast members from the Opera House’s production of Cinderella and the Lowry’s Sound of Music – with a special performance from theatre usher turned The Voice finalist, Lucy O’Bryne.
We’re also promised a special video message from a true Manchester mega-star in advance of the forthcoming musical The Girls at the Lowry
Getting the blood pumping will be The Printworks Street Dance 2015 winners, The Aim Sky High Company from Stretford, who will wow the crowds with their mesmerising winning performance.
Kicking off the show will be the ever-wonderful Manchester Show Choir. The group performs pop hits and musical theatre anthems with the force of over 80 voices. This year the choir will be singing a genuine Christmas classic at the switch-on event for an opening act to remember.
Of course the switch-on wouldn’t be complete without a dramatic finale – a 10 minute firework extravaganza choreographed to music.

All adults aged 50 and over will have had a coronavirus vaccine by May...