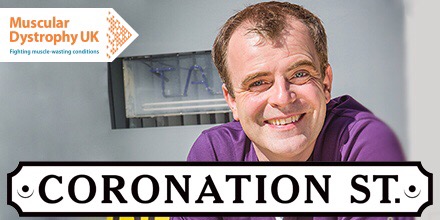 Muscular Dystrophy UK has praised Coronation Street for its “sensitive, accurate” storyline about muscular dystrophy.
This week, viewers will see much-loved character Steve McDonald – played by Simon Gregson – discover that both he and his unborn children could inherit the genetic condition myotonic dystrophy.The storyline runs from Monday (10 October) until 28 October.

ITV approached the charity to advise the scriptwriters and production team about what Steve, Michelle and Leanne may be going through and they one of the charity’s peer support volunteers, Sarah Innocent, whose husband Matthew has myotonic dystrophy, to share her very personal story with the researchers. They were so grateful for her candour. She and Matthew have a daughter, Amelie. Sarah talked about their experience of early pregnancy genetic tests and the difficult decisions they have had to make.

“It’s good to see muscular dystrophy portrayed on a national TV show. As well as educating people, I hope it raises funds for research to help future generations. It was an honour to be involved in the writing process and I hope that by sharing our story we might be able to help other families.

“Our little girl, Amelie, was already two-years-old when Matthew was diagnosed with myotonic dystrophy. We were referred to a genetic counsellor, who explained our options for testing Amelie, as well as family planning for the future. We walked into the room adamant that we were going to get Amelie tested as soon as possible. But after talking for two hours we realised we didn’t want to know if Amelie had the condition. After coming to terms with Matthew’s diagnosis, we decided to try for more children. But, sadly, prenatal testing revealed bad news and we have had two failed pregnancies. We’ve decided not to try again for further children and are enjoying being a family of three.”

Myotonic dystrophy is one of 60 muscle-wasting conditions that causes progressive weakness in the body and organs. It currently affects around 7,000 people in the UK.

The condition is caused by ‘unstable mutations’ that tend to get worse when passed from generation to generation. It follows a ‘dominant’ inheritance pattern, which means that on average half of the children of an affected person will be diagnosed. Both men and women are equally likely to be affected and to pass on the disorder.

In the show, Michelle is devastated when she learns there’s no cure or treatment for myotonic dystrophy. But Muscular Dystrophy UK’s CEO Robert Meadowcroft, says there is good reason to be hopeful.

“Research into all types of muscular dystrophy is making rapid progress with a number of new potential treatments offering the kind of hope that would not have been thought possible even 10 years ago. These potential new treatments raise the prospect of being able to significantly reduce the severity of symptoms, thus lessening the enormous burden the condition places on those affected and their families.

“Thanks to the support of families and donors, for more than 50 years we have played a vital role in funding the research and clinical evidence underpinning developments to date. One of the challenges we now face is to ensure continued funding for this lengthy research.

RNCM to Explore Music in Manchester During WWI