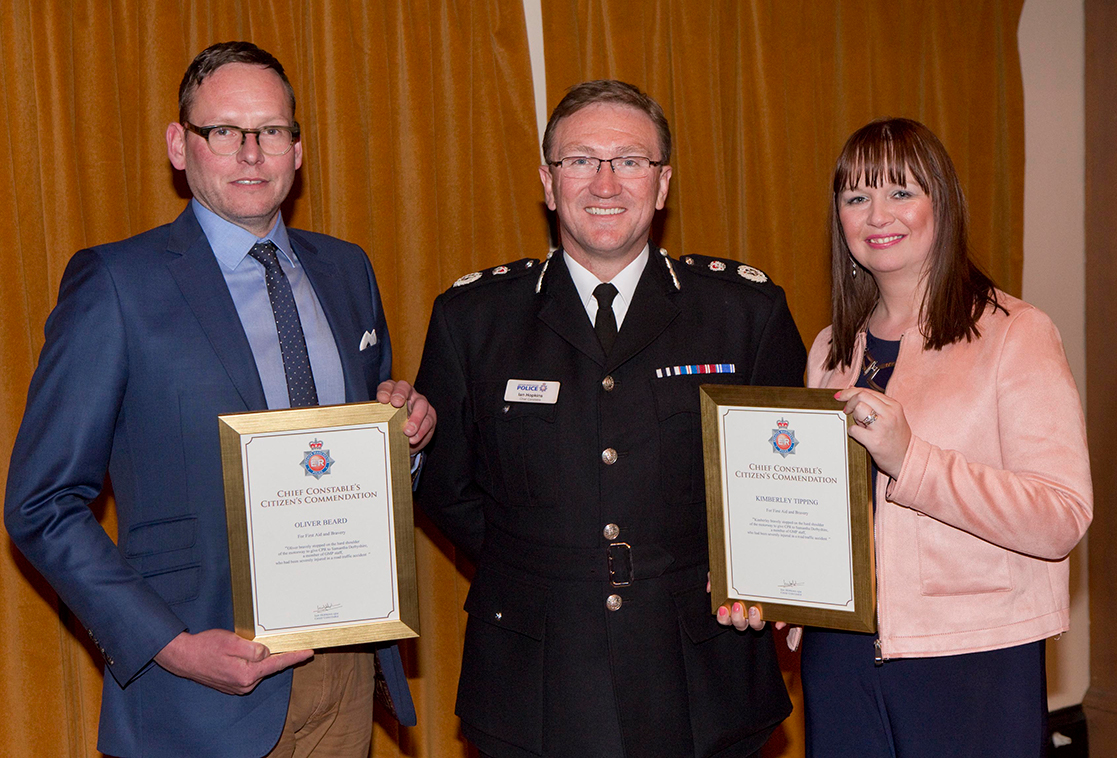 Two members of the public have received recognition for their bravery in helping a fatally injured officer after her car was rendered disabled on the M61.

Special Officer Samantha Derbyshire was travelling home at around 3am when her vehicle was involved in a minor road traffic collision, resulting in the car becoming stuck at a horizontal angle across two lanes.

Miss Derbyshire was standing close to her vehicle after alighting it appropriately, when a north bound HGV struck both the car and Miss Derbyshire, who was subsequently thrown onto the hard shoulder of the motorway.

Oliver Beard was travelling to Scotland and discovered the collision, prompting him to call the emergency services from further along on the hard shoulder.

Also at the scene was Kim Tipping who was making her way home from Manchester airport. Mrs Tipping realised there was likely to be somebody injured after seeing the state of the vehicle following the collision, and began searching the hard shoulder for the passenger/s.

Upon discovering a seriously injured Miss Derbyshire, Kim and Oliver worked together to administer chest compressions and mouth to mouth, doing this for ten minutes until paramedics arrived.

Unfortunately, Miss Derbyshire’s injuries were not survivable and she was pronounced dead at the scene.

Despite the tragic outcome, both Kim and Oliver acted selflessly and prioritised the need to help Miss Derbyshire, above considerations for their own safety.

Upon receiving the award, Kimberly said: “Both Oliver and I tried our best to help Samantha, but unfortunately her injuries were so severe that she wasn’t able to survive the accident.

“I acted very much on impulse and as a cabin crew trainer for Jet2.com, I have experience of first aid training and I have dealt will all kinds of emergencies where teamwork is essential.

“Oliver and I very much worked as a team and supported each other in our efforts to save Samantha, and I am appreciative that our efforts have been recognized for an award.”
Oliver added: “As Kim said, despite our best efforts Samantha unfortunately lost her life in this awful accident.

“While I am honoured that our actions and efforts have been recognised with this award I feel I was only acting on human instinct.

“Working for National Radio Bank my role involves travelling hundreds of miles a week all over Europe, and I would like to think that should I or anyone I know ever be in that situation someone would ‘step up’ ”

Chief Constable Ian Hopkins who presented the pair with their awards said: “Not only a member of police staff, Sam also served the public as a Special Constable in the Bolton division and had recently been accepted in her application to become a Police Constable.

“This was a very tragic accident, and Sam is sorely missed by her family, friends, and GMP colleagues.

“I would like to offer my personal thanks to both Kim and Oliver for their efforts in trying to save Sam. They should both be proud of the way they acted on that fatal night. They both demonstrated great care and compassion for which Sam’s family and I are extremely grateful.”