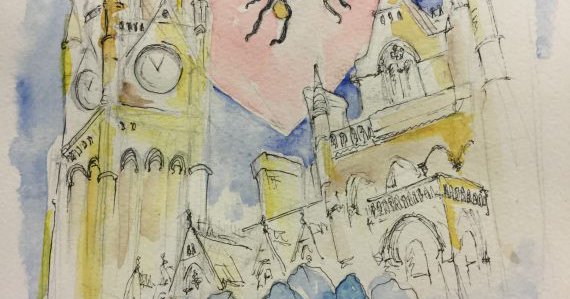 Chetham’s students have arranged and recorded a new version of Oasis’ Don’t Look Back in Anger to encourage people to remember and support victims of terror this Christmas.

Directly across the road from the Arena, boarding students were woken from sleep to wait through the night as the incident unfolded. Inside the police cordon, they were unable to leave school for 24 hours – and, as the city gathered in Albert Square to pay its respects to the victims, they held their own vigil on the school yard. Appropriately, they used their most powerful language – music – to express their feelings, singing John Lennon’s Imagine and the Oasis song, Don’t Look Back in Anger, in an expression of support and solidarity.

One student shared a video of Don’t Look Back in Anger on Facebook, giving students’ friends and family the chance to see their children safe and well until they could get home. Her video was picked up by numerous media channels, and when two days later the song was sung again in St Ann’s Square, it was clear that it would come to play an important part in the city’s response to the tragedy.

During the summer, Chetham’s students came together again to plan a longer lasting memorial. Many of those who lost their lives were young people, close in age to Chetham’s students. They were music lovers, listening to pop star Ariana Grande’s concert. These factors, combined with the proximity of the attack, brought it close to the heart of this school – the country’s largest specialist music school, where students earn their places through musical potential, and where music is a shared language for young people from a rich diversity of backgrounds and nationalities. With those things in mind, the Head Boy and Girl, Matthew Wilson and Flossie Plain, suggested a new arrangement of Don’t Look Back in Anger – one which could be recorded and shared more professionally and used to raise funds after the attack.

Matthew and Flossie, along with their fellow Sixth Form students, led on the project. They contacted former student Joshua Hickin, who created the new arrangement for trombone ensemble, a small band and the massed voices of the school’s staff and students. Matthew acted as Musical Director for the recording, with Flossie as Producer. The recording took place in The Stoller Hall, the school’s concert venue, supported by the venue’s Technical Manager Simeon Ogden; whilst Chris Mann of Mannmade Productions, a longstanding friend of the school, generously offered his time to produce the video. Head Alun Jones released the entire school from lessons for an afternoon to allow the recording to take place, and finally, permission was received from the Sony Corporation on behalf of Oasis for the song to be shared.

Chetham’s are sharing the video online to mark the six-month anniversary of the attack – which also happens to fall on the feast day of St Cecilia, the patron saint of music. They hope that people hearing it will contribute to the British Red Cross UK Solidarity Fund, supporting victims of terror not only in Manchester but across the country.

“This initiative was led entirely by the student body,” Mr Jones explained. “They felt strongly that the attack was directed at their age group and peers; and as such, they wanted to use music from their own generation to reflect on it. The first vigil on the yard was very much an expression of their own feelings, and of mutual support at a very difficult time. It was never designed to be shared beyond the school walls; but it struck a chord with the people of Manchester, and felt like the right choice of music for us to record. ”

Coming together as a school to sing and make music was a cathartic process for everybody who had been onsite in May, and we’re very grateful to Joshua, Chris and others who have helped the students turn that into something we can share with the wider world. We hope you’ll watch the video and see what these remarkable young people were able to create in just a few days – and we hope that those who can, will make some contribution to support those most closely affected by the acts of terror that have, tragically, taken place in the country during 2017.”

Matthew added, “The project for me has two main aims, firstly to act as a symbol of remembrance for those who were affected on that night in May, and secondly to try and raise as much money as possible to support the victims and their families through the work of the British Red Cross. My huge thanks go to all those who supported the project from both the technical and production side and the students and staff who feature in the track and video.”