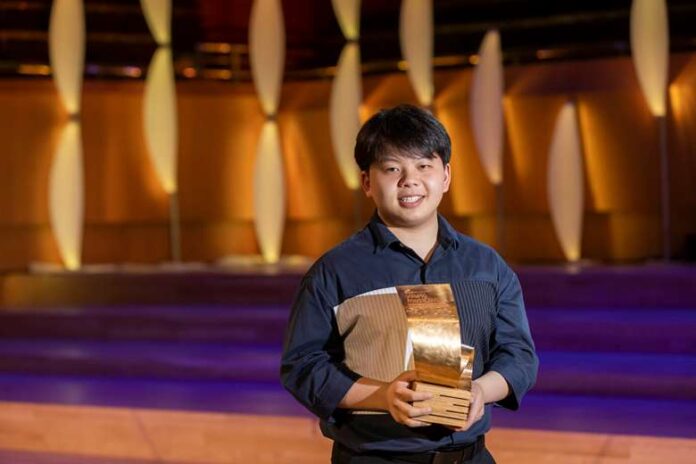 17-year-old percussionist Fang Zhang – born in China’s Henan province and a recent student of Chetham’s School of Music in Manchester has been revealed as BBC Young Musician 2020.

Fang Zhang follows in the footsteps of 19-year-old American-born/UK-based pianist Lauren Zhang, who won the competition in 2018 and went on to perform in the UK and beyond, including a debut at the BBC Proms in 2018, and appearances as soloist with the BBC Scottish Symphony Orchestra, European  Union Chamber Orchestra, China National Symphony Orchestra, and Adelaide Symphony Orchestra – among others.

A recent student at Manchester’s prestigious Chetham’s School of Music, which he joined in September 2018, Fang Zhang is a member of China Youth Percussion Orchestra, and thanks to this scheme he has been performing around the world since he was 11 years old. Despite his young age, he has already won prizes at international percussion competitions all around the world, including USA, Japan, and his native China. Among his tutors are international percussion luminaries such as Royal Northern College of Music Deputy Director of Percussion Le Yu, and Chen ShaoLun, president of the Shanghai National Percussion Association.

Fang Zhang impressed the judging panel with a performance of one of the gems in contemporary marimba repertoire: Prism Rhapsody by Japanese composer and marimba innovator Keiko Abe. He was accompanied by the BBC Philharmonic conducted by Mark Wigglesworth.

Taking place after a year-long delay due to the global pandemic, the socially-distanced BBC Young Musician 2020 Grand Final was filmed on Sunday 25 April at Manchester’s Bridgewater Hall without an audience in attendance. The competition’s three finalists performed on stage with the BBC Philharmonic conducted by Mark Wigglesworth, performing with reduced  numbers to allow the required social distancing.

Fang Zhang says: “I am honoured and delighted to win BBC Young Musician 2020, and feel so lucky considering the talent of the other finalists. The BBC team is amazing and I want to thank them and my schools, Chetham’s School of Music and Qingdao Percussion College, for supporting me through the whole programme in every possible way.”

On Fang Zhang’s performance at the Grand Final, Angela Dixon says: “BBC Young Musician 2020 has been an outstanding competition, the standard has been incredibly high and all three finalists showed exceptional musicianship. Fang chose to perform on a single instrument, the marimba, but elicited a kaleidoscope of colours and expression from it that deeply moved the jury and presenters.  It was a privilege to be one of the few people to hear his performance live.”

Conductor Mark Wigglesworth says: “BBC Young Musician is always a glorious celebration of the future, but especially this year, it offers a much needed sense of optimism to everyone in the classical music world. All three finalists have shown a tremendous passion and determination to maintain their commitment to the competition across a year of uncertain silence. They play with humility and respect but daring and personality too, encouraging all who hear them to look forward to more positive times ahead.”