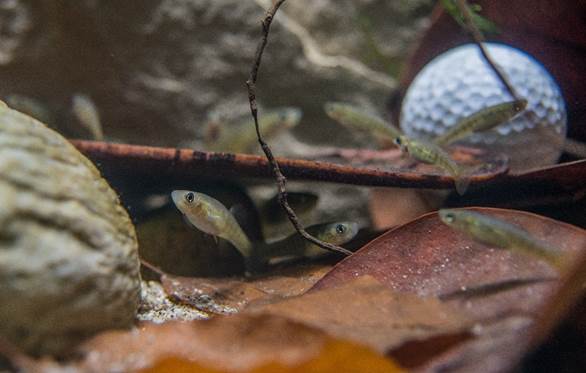 Conservationists from Chester Zoo are fighting to help save a rare fish on the paradise island of Bermuda.

Bermuda’s killifishes are found only in a few ponds, some of which are on the fringes of the nation’s golf courses.

Many of these brackish water ponds have underground links to the sea so the fish have to adapt to different levels of salinity, temperature and dissolved oxygen which vary throughout the year.

A relatively small change in the local environment could wipe out these species forever, losing millions of years of evolution and further damaging the rich biodiversity of our planet.

Now, as part of a bid to save them, Chester Zoo has joined forces with the Bermudian government to help conserve the species.

It is the latest in a major partnership between the zoo and the government as Chester’s conservationists offer help to protect some of the island’s threatened wildlife.

The zoo has established a small population of the fish in Chester, setting up the UK’s first ever breeding programme for the species.

Chester is one of only two zoos in Europe taking part in the programme, so every breeding success is a major milestone in creating the safety net population which could help protect the future of the species.

To help with breeding programme success, zookeepers have tagged the parent fish in the group at the zoo with visible silicone implants to help tell them apart from their offspring.

Dr Gerardo Garcia, Chester Zoo’s Curator of Lower Vertebrates & Invertebrates, said: “No golfer wants to end up in a water hazard, but without the existence of these courses and the protection they provide for these surrounding natural water features, unique habitats and species could have been lost.

“Now we know how perilous the situation is for the Bermudian killifish, we are going to try everything possible to help save them from extinction – by working closely with the Bermudian government and by establishing the UK’s first ever breeding programme for the species.

“Threats to rhinos and orangutans generate a lot of public interest, but absolutely every species matters. All life on our planet is interconnected. The rich biodiversity of our world is under threat and conservation is critical. We will fight for the future of the Bermudian killifish.”

Dr Mark Outerbridge, Wildlife Ecologist at the Department of Environment and Natural Resources in Bermuda, said: “Chester Zoo has proven to be a valued ally in the ex-situ breeding and husbandry of four island endemics (the killifish, a skink and two species of land snails). Knowing that there are established populations of these very rare animals in captivity outside of Bermuda gives me greater confidence in their longer term chances of survival.”

Last year the warmest year on record without an El Niño