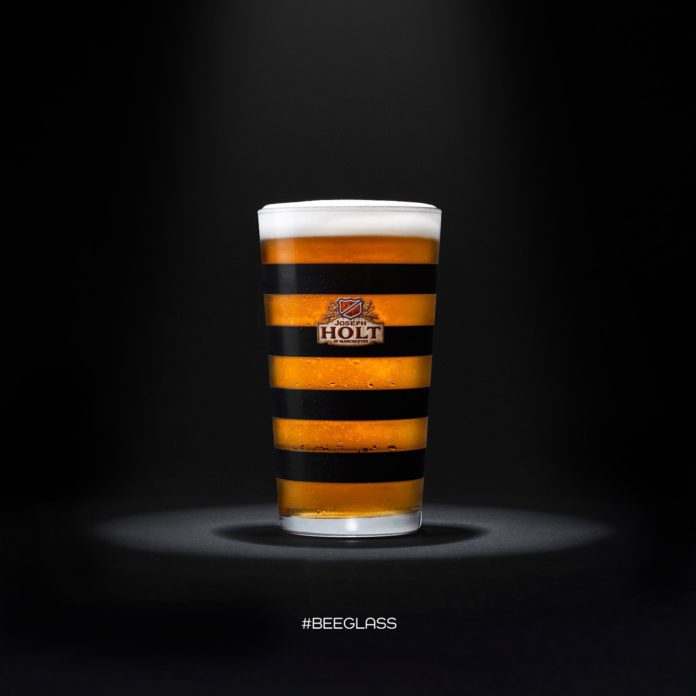 Local advertising agency, Cheetham Bell, have tapped into the spirit of the city they call home with the creation of a beautifully-simple beer glass for Joseph Holt.

The award-winning, Manchester-based family brewer, Joesph Holt, have taken two of the city’s iconic symbols for which it is famously synonymous with, beer and the bee, to create the Manchester Bee Glass.

On first appearance, the humble pint glass seems to simply reveal black stripes, but once filled with Joseph Holt’s golden ale, it effortlessly transforms into the iconic Manchester Bee.

Martin Smith, Creative Director at Cheetham Bell said: “The best ideas are the simplest. You see the bee all over Manchester: on streets, shopfronts, even tattooed on people’s bodies. We’re over-the-moon to have helped our client become the first brewer to put it on a glass.”

The agency behind the campaign, Cheetham Bell, are known for their creative solutions and have an expanding client base, which includes high-profile brands such as; John West, Soreen, Dr Oetker, BBC, On the Beach and United Utilities.

Mark Harrison, MD at Cheetham Bell added: “Given that Jospeh Holt is so closely linked with the history of Manchester, we wanted this new campaign to really showcase the roots of the brand. Equally, their latest ale is growing in popularity amongst the millennial and Gen Z audience, so this glass creation combines a strong and proud nod to the history of the brand but with a cool and innovative collectors item.”

The limited-edition glasses will only be available while stocks last. Joseph Holt’s Marketing Manager, Paul Longmire, commented: “We’ve combined two of Manchester’s most iconic symbols – beer and the bee – to create the Manchester Bee Glass. We are delighted to immortalise the symbol of our great city this way. The Manchester Bee is something that all generations relate to. We hope people enjoy watching their beer turn into a bee”.

The idea of the Manchester worker bee as a symbol of the city dates to the Industrial Revolution – factories were often referred to as beehives because workers were so industrious. In 1842, the bee was first officially incorporated into the Manchester coat of arms.

However, this is the first time it will emerge to turn a pint glass into a bee.