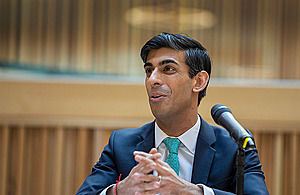 The chancellor last night overhauled his emergency business loan scheme after the Treasury received more than 130,000 enquiries but less than 1,000 were approved.

Previously, government-backed loans for small firms were only available for those businesses which had been rejected for a commercial loan from their bank.

Now the scheme has been extended so that all viable small businesses affected by COVID-19, and not just those unable to secure regular commercial financing, will now be eligible should they need finance to keep operating during this difficult time.

The government is also stopping lenders from requesting personal guarantees for loans under £250,000 and making operational changes to speed up lending approvals. The government will continue to cover the first twelve months of interest and fees.

It will provide a government guarantee of 80% to enable banks to make loans of up to £25 million to firms with an annual turnover of between £45 million and £500 million. This will give banks the confidence to lend to more businesses which are impacted by coronavirus but which they would not lend to without CLBILS. Loans backed by a guarantee under CLBILS will be offered at commercial rates of interest and further details of the scheme will be announced later this month.