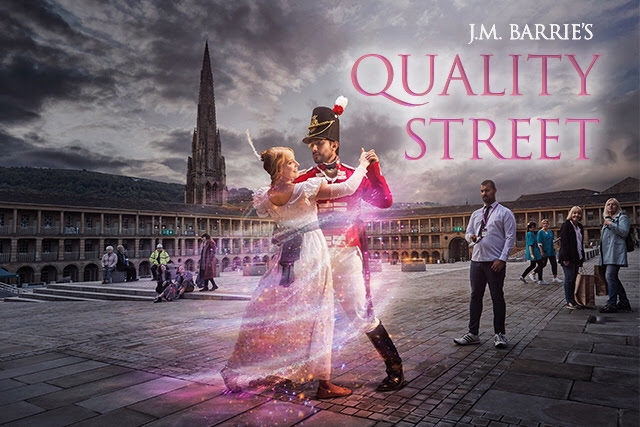 Casting is today announced for Quality Street, Laurie Sansom’s debut production as Artistic Director of Northern Broadsides. The production, a rare revival of J.M. Barrie’s farce, will head to The Lowry from Tuesday 25 February – Saturday 29 February after opening in Halifax, the home of Quality Street™ the UK’s most popular brand of chocolates.

Barrie’s play was so popular in its day that it gave the chocolates their name. Jessica Baglow will play the title role of Phoebe Throssel and Dario Coates as love interest, Valentine Brown. Further cast features Jim English as Fanny Willoughby/Arthur, John Gully as Recruiting Sergeant/Spicer/Georgy, Claire Hackett as Patty, Louisa May Parker as Susan Throssel, Alicia McKenzie as Mary Willoughby, Sophie Mercell as Charlotte Parratt and Gabriel Paul as Ensign Blades/Isabella.

The show marks the beginning of a new producing model for Broadsides, with each production co-created with “creation squads” formed from the local community. For this production, the actors will collaborate with workers from the Quality Street™ factory, developing contemporary tales of hapless love and a live commentary that will frame the action of Barrie’s regency rom-com. As well as providing a modern lens through which to view Barrie’s story, Broadsides also aims to build long-lasting relationships between the employees and their local theatre company.

Phoebe Throssel lives on Quality Street, the bustling hub of a quaint northern town where she runs a school for unruly children. Ten years since a tearful goodbye, an old flame returns from fighting Napoleon. But the look of disappointment on Captain Valentine’s face when he greets a more mature, less glamorous Phoebe, spurs our determined heroine to action. She becomes the wild and sparkling Miss Livy, a younger alter-ego who soon entraps the clueless Captain. As their romance is rekindled, can she juggle both personas? Or will her deception scandalise the town and wreck any future with the man she loves?