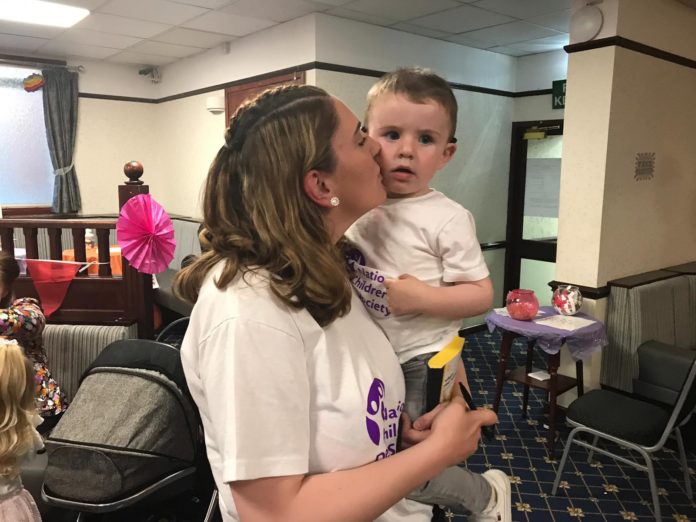 The carnival-themed night was the brainchild of Manchester residents, sisters Amie Heatley and Libby Clarke.

The event raised a total of £2,400 for the charity’s vital work, far in excess of the original £500 target.

Around 150 people attended the carnival night and enjoyed an auction, with lots including a signed Manchester United football and an autographed picture of City star David Silva, and a raffle with a range of generously donated luxury prizes from days out at theme parks to stadium tours to manicures and pedicures.

To put the finishing touches to the carnival night, a DJ played music late into the night, cakes were donated to satisfy the revellers’ appetites and for the kids there were glitter tattoos and face painting.

Amie, 26, is a primary school teacher and her sister Libby, 19, works in Tesco. Amie’s son Theo is nearly 2.

“The atmosphere was fantastic and everyone commented on what a brilliant night they’d had.
“Finding out that your child is deaf is really hard in the early days. Since finding out that my son Theo was born deaf we have, as a family, received a huge amount of support but I know there are people that aren’t as lucky as us.

“The National Deaf Children’s Society does so much to support and bring together families, which is why we chose to support the charity.”

“I want to say a huge congratulations to Amie and Libby for organising this tremendous carnival night for the National Deaf Children’s Society. It was a fantastic idea and we’re so grateful for every penny they’ve raised.
“Thanks to the support of people like Amie and Libby, we’re able to keep on doing what we do, supporting deaf children and their families across the UK, now and into the future.”