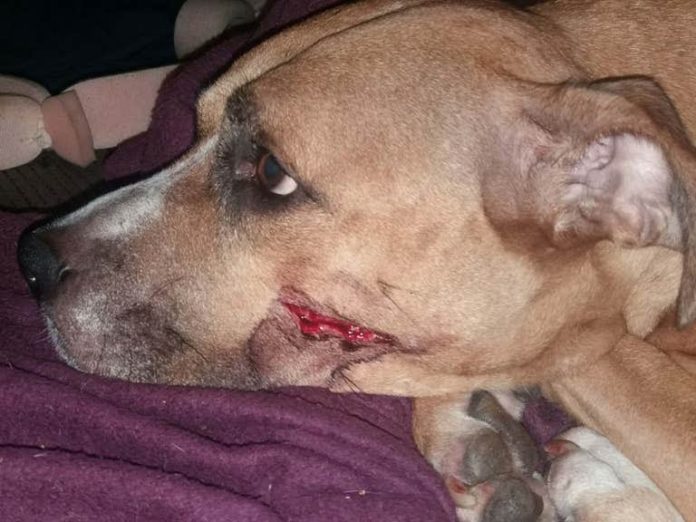 Police have launched an urgent appeal after seven new born puppies were stolen in Harpurhey and attacked their mother who tried to defend them.

Two men armed with machetes gained entry to a flat on Fernclough Road after following a man inside and attacking him.

Leaving the victim on the floor with defensive wounds to his forearms and hands, the offenders then began their search of the property, looking for any valuables which they could steal.

Not content with the cash, keys and phone which they had taken from the victim, the two men continued their search and came across a litter of five-week-old staff cross puppies and their mother, Zena.

Showing no regard for the safety of the puppies, the two offenders started picking them up and shoving them in carrier bags.

When Zena tried to bravely defend her pups, she was hit in the head with a machete by one of the men, causing a deep laceration.

The offenders then fled the scene.

Both of them are described as black, skinny build, believed to be in their 20s and were wearing dark clothing with the hoods up.

One of the men is believed to be around 6ft 3in – 6ft 4in tall and was wearing a grey and black camouflage face covering.

His accomplice was slightly shorter and wearing a plain black face covering.

Detective Constable Nick Kershaw, of GMP’s City of Manchester Division, said: “We are urgently appealing for information which will help us locate the puppies which were stolen this morning.

“The dogs are only five-weeks-old and without their mother, they likely won’t survive very long so it is important that anybody with information that can assist, please contacts police as a matter of urgency.

“This was an incredibly callous robbery, where the offenders showed absolutely no regard for the safety of anyone, human or animal, who was present at the time. They only had one thing on their mind, which was to take whatever they could.

“Please help us return these puppies and reunite them with their very sad mother, Zena, who has been left devastated.”