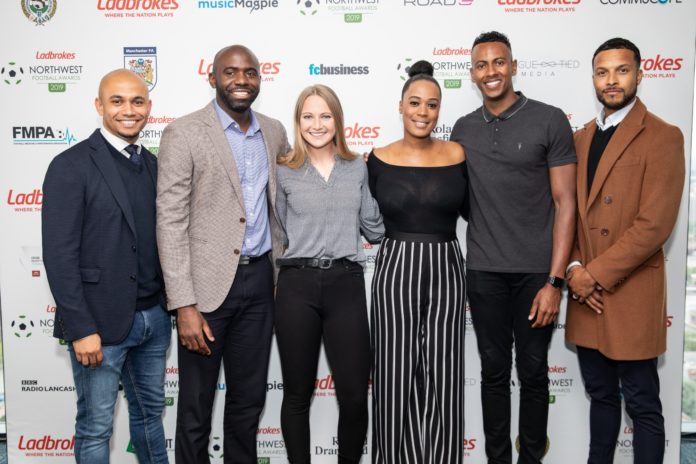 Who are this season’s North West Football heroes?

The 2019 Ladbrokes Northwest Football Awards aims to reward them all and yesterday launched its region-wide call for the North West’s football community to submit their entries.

Choosing the winners will be no easy task after such a breath-taking season for clubs in the region – from Manchester City’s Four-midable season, through to Liverpool’s stunning comeback victory over Barcelona and triumph over Tottenham in the Champions League Final.

Manchester City Women’s remarkable season also showcased their immense talent with the double cup win. Salford’s promotion to the Football League for the first time in the club’s history and Bury’s extraordinary comeback, securing promotion to League One, following their relegation last season, will also make for a tough competition. Not to mention AFC Fylde’s FA Trophy Cup Win, and the thrilling end to the season with Macclesfield’s run to avoid relegation and Tranmere’s double promotion, after an exhilarating play off final.

The Ladbrokes Northwest Football Awards (NWFA), celebrates the Northwest region’s footballing elite and pays tribute to those from both on and off the pitch, who have excelled in the 2018/19 season.

Now in its 12th year, the 2019 ceremony will see 22 awards presented to those who have achieved footballing excellence, from grassroots level through to the elite level of the beautiful game.

2019 sees the announcement of a brand-new partnership with Ladbrokes, who have signed as NWFA title sponsor for 2019 and 2020, with an option for 2021.

Simon Clare, from Ladbrokes, said: “We are absolutely delighted to be involved with the Northwest Football Awards and we look forward to showcasing our commitment to the sport and celebrating the football industry’s best from across the Northwest region.

“We are keen to give something back to help celebrate the outstanding footballing talent, from both on and off the pitch, at all levels of the game. At Ladbrokes, we strive to lead the way in the gambling industry, the same way those in football strive to be the best in their fields. We are thrilled to be partnering with the Northwest Football Awards to reward that excellence.

The timing is perfect for us as we have recently launched our group-wide responsible gambling campaign, Changing For The Bettor, to deliver the safest gambling environment for all our customers.”

The official launch of the Ladbrokes Northwest Football Awards took place last night at The Hilton’s Cloud23, hosted by the BBC’s Hugh Ferris with a panel of special guests, including Liverpool FC Women’s Jemma Purfield, ex-Manchester United player, Danny Webber, Troy Townsend from Kick It Out, Leanne Ayin from Women in Football and John Callaghan from Bootle Bucks Inclusion FC, who are the 2018 winners of the Kick It Out Promoting Inclusion Award.

It was attended by many industry professionals from across the region, including Michael Carrick,  Fabrice Muamba, Sam Matterface and Brian Horton.

The night signalled the start of a process that will see thousands of football fans – from the elite to grassroots level – vote for their winner across a range of categories.

Nominations are now open.  Having grown year-on-year, the 2019 Ladbrokes Northwest Football Awards is expected to be bigger than ever.

“What a season of football, we have had in our amazing region, from all levels of the game, culminating with the nail-biting Premier League title race between Manchester City and Liverpool, which showcased the remarkable talent in the Northwest.

“The raft of nominations last year and the immense competition, will no doubt be intensified this year, given the extraordinary year of football and the astounding end to the season.

“We’d love to hear from as many clubs and organisations as possible and are urging them to make their nominations now online at www.northwestfootballawards.com..”

The categories for nominations this year include:

Categories decided by Public Vote and the Judging Panel include: