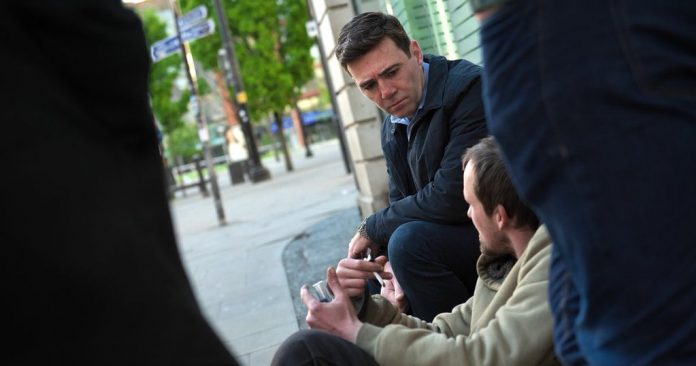 The Mayor of Greater Manchester has called for a new urgency from Party leaders to solve the homelessness and housing crisis.

In a letter to Theresa May, Jeremy Corbyn and Vince Cable, he says that a year of working within the limitations of local powers on housing has shown him that the housing crisis will never be solved by more of the same.

The Mayor believes the solution is to give combined and local authorities extensive new freedoms to intervene, fix the broken market and build more homes for social rent. He is calling on Party Leaders to urgently introduce a new Housing Bill and ensure it cannot be crowded out by the time pressures of Brexit.

Mayor of Greater Manchester, Andy Burnham said: “It is time that Parliament woke up to the scale of the crisis unfolding on our streets.

“Rising levels of rough-sleeping are the most visible sign of our broken housing market. But, behind every person on the street, hundreds more are just one step away in poor rented accommodation.

“Here in Greater Manchester, there is no shortage of passion and determination to do something to help. But that urgently needs to be matched by people in Parliament and Government showing the same. We cannot allow the intricacies of Brexit to divert us from the humanitarian crisis unfolding on our own streets.

“Any night spent on the streets causes immense damage to people’s physical and mental health. Housing is a health issue and in this, the 70th anniversary year of the National Health Service, what better way of marking than by extending the right to healthcare to safe housing.”

The letter to Party Leaders comes as Greater Manchester gets ready to mark progress over last 12 months and recommit to challenge ahead.Tackling homelessness and ending the need for people to sleep rough on the streets of Greater Manchester has been a key priority for Andy Burnham in his first year as Mayor.

Over the past 12 months, Greater Manchester’s public, private, voluntary and faith sectors have created a movement that’s now taking real action to support some of the most vulnerable people in the city-region.

Today’s event that will be a reflection of the movement that’s been created to tackle homelessness, highlighting what has been achieved within the past year and what work remains. Greater Manchester’s ground-breaking Housing First scheme, where entrenched rough sleepers are given a tenancy alongside the emotional and practical support they need to access the right kind of health, training and employment services, will be highlighted as an important model and key part of the city-region’s efforts to end rough sleeping.

At the event the Mayor will recommit to ending rough sleeping in Greater Manchester by 2020 but also ask Party Leaders to work with him on a number of key areas to solve the homelessness and housing crisis. These include the regulation of the private rented sector, giving local areas freedom invest in much-needed housing and allow more local control of welfare budgets so that they support the most vulnerable rather than sustain them in homelessness and insecurity.

The Mayor will also cite the UN Charter of Human Rights which specifically links right to an adequate standard of health and wellbeing for all people with the need for housing.