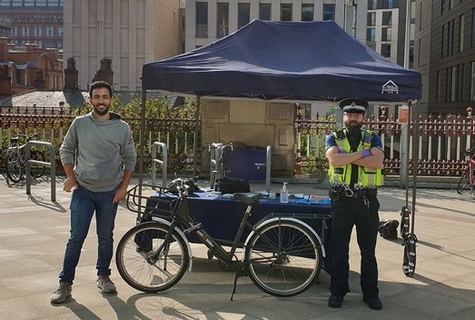 Abandoned bikes left at railway stations in Manchester and Cheshire are being donated to charity thanks to the efforts of a British Transport Police PCSO.

Each year thousands of abandoned bikes pass through the hands of British Transport Police.

Now, PCSO Thomas Gilmour, based at Manchester Piccadilly, has come up with a novel idea to ensure someone else’s trash becomes treasure for one of the world’s poorest communities.

Every abandoned bike is examined with a UV torch by PCSO Gilmour and the team, and checked against the Bike Register database.

When the bikes cannot be traced they are kept for 90 days and then, thanks to the efforts of PSCO Gilmour, who has set up agreements with Network Rail at Manchester Piccadilly and Avanti West Coast at Macclesfield station, they are donated to the Stoke-on-Trent-based charity, CycleofGood.

The bikes are shipped to Blantyre in Malawi to an organisation called Beebikes Africa, where they are refurbished by local workers – providing them with jobs and training – before being sold on. In cases where the bikes aren’t sold, they are instead recycled – the inner tubes are transformed into wallets and phone cases by a team of tailors employed by the charity. The products are then sold globally via the charity’s website. The money generated builds schools in Malawi and provides paid employment for the people who refurbish the bike and make the wallets.

PCSO Gilmour said: “We get hundreds of bikes left unclaimed at stations – some of these are in perfect working order. We do a thorough check of the bike to try to trace the owner and if that fails we hang onto it for 90 days and continue to check any late reports. When all attempts to reunite the bike with its owner have been exhausted then we contact CycleofGood who turn the unwanted into a valuable resource.

“The benefits of the scheme are twofold – the unwanted bike and its parts are recycled and not trashed plus it provides opportunities and income for people in Malawi.”

Zoe Kasiya, operations manager at CycleofGood said: “In Malawi owning a bike transforms lives, helping to set up businesses or get children to school. A bike to a Malawian is like a car.

“This money generated from the bikes also helps build schools and the donated bikes themselves transport goods from place to place. We also train people as bike mechanics so they can learn a trade and earn money for a more sustainable future.

“Thank you to everyone involved in recycling your bikes through British Transport Police – you are helping to secure employment in Malawi and fund childcare for vulnerable children.”

PCSO Gilmour added: “You should always make sure your bike is security marked and registered with BikeRegister. We run regular bike marking events at stations where commuters can get their bikes marked and registered for free. Follow @BTPGtrMcr to find out the next date in the Manchester area.”

Salford steps up for Santa Appeal