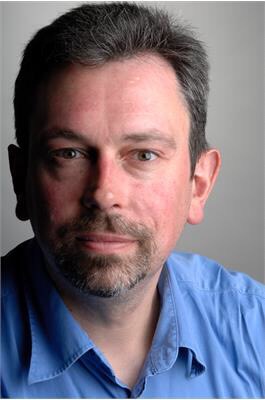 Everybody knows how to play, but have you ever wondered about where play comes from? Next week, a lecturer from the University of Bolton takes the British experts on play into his special ‘time machine’, looking at how we play today has descended from the way people played centuries – and millennia – in the past.

Dr Chris Bateman, a Researcher and Senior Lecturer at Bolton (and a Visiting Professor at Laguna College of Art and Design in California) has been sharing his work exploring the historical lineages of player practices all over the world, most recently at a conference in the Brazilian city of Teresina in November last year. His latest gig is closer to home – at the fourteenth National Playwork Conference in the British seaside town of Eastbourne, on Tuesday 1 March.

‘Play has a long history,’ Chris explains, ‘and goes back even further than humanity. I can trace some of the roots of the player experience back to the dawn of life, five hundred million years ago.’

But he is keen to stress that it is humans who have taken the play experience furthest. ‘Our imagination is what sets us apart from the other animals,’ he adds. ‘Because of our talent for make-believe, we play in ways that go far beyond anything else that ever lived.’ Chris uses a special visual presentation tool called Prezi to build image timelines that take people on a “time travel” journey to see where play comes from, and to wonder about where it is going.

Conference organiser Meynell is thrilled to have Chris present at the conference, and stresses the importance of play and playwork. ‘Play is beneficial for everyone, and especially children, helping them to learn new skills and securing better health,’ Meynell explains. ‘The National Playwork Conference brings together the best of British playwork under one roof, and it’s a great pleasure to be able to have Chris present to us this year.’
The conference brings together more than 200 delegates who work in the playwork field from all over the United Kingdom. This year’s conference is on 1-2March and Chris is talking in the track The Power of Play. The event is an opportunity to share stories and skills, and also to debate the political situation facing playwork, which has suffered in the recent era of ‘austerity’. Last year’s conference produced a policy consultation framework for guiding government to support the important work of assisting children’s opportunities for play. Part of this proposal included the recommendation to develop a national programme of ‘playable neighbourhoods’ and a new national body for playwork, although the government has so far been reluctant to support these measures.

Chris has enjoyed a highly successful career in game development, working on more than 45 games including classic titles such as Discworld Noir and Ghost Master, as well as major global franchises such as Cartoon Network: FusionFall and Motorstorm: Apocalypse. He even self-funded an ‘artgame’ called Play with Fire that was featured in a travelling exhibition. Chris’ talents and work also go well beyond game development, stretching into groundbreaking academic research that combines game studies, neurobiology and philosophy. His work on the foundations to game aesthetics, published as the book Imaginary Games, is part of a long-term project combining philosophy and scientific research to help understand play and games. In 2013, he became the first person in the world to receive a doctorate in the aesthetics of games and play, via a PhD by Publication drawing from his existing work.

Around 31,000 heart and circulatory deaths attributed to excess weight and obesity every year