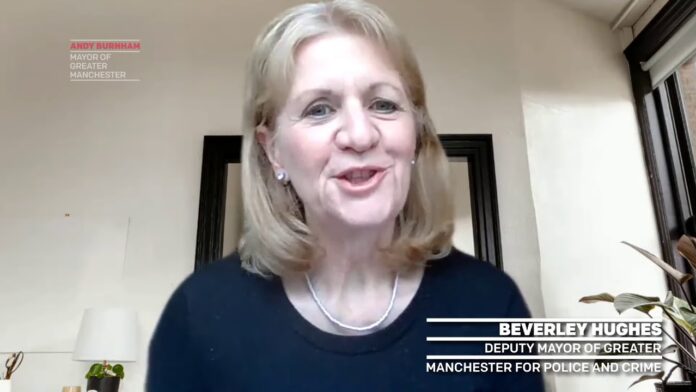 THE GREATER Manchester Serious Violence Action Plan has been unveiled today  as figures reveal that hundreds of weapons have been taken off the streets in the last year and knife-related hospital admissions have fallen.

The plan uses a community-led approach with public health integrally involved, and with families, communities, education and policing at its heart, in a concerted drive to prevent violence across the city-region.

It follows a multi-million pound investment in tackling serious violence across the city-region, led by Greater Manchester’s Violence Reduction Unit (VRU), which brings together health, police and criminal justice, education, youth justice, and the voluntary, community and social enterprise (VCSE) sector. The significant sum injected into the in the VRU matches a similar package of support invested in, and focusing on, enforcement.

The definition of serious violence in the action plan includes: violence with injury and without injury; domestic abuse, homicide, stalking and harassment, possession of weapon offences, robbery, sexual offences including rape, and public order offences such as inciting racial or religious hatred.

The new plan sets out how Greater Manchester will continue to tackle the underlying causes of violent crime through a combination of early intervention, education and prevention, alongside police enforcement action, delivered by the VRU.

The community-led, public health approach underpinning this will use different interventions throughout a person’s life to help reduce the propensity for violence. This will mainly focus on young people and those from our most deprived communities.

With the community, we will work with those most affected by serious violence to build aspirations and opportunities in the most hardest-hit areas. A six-month pilot in six sites across Greater Manchester, working with the VCSE sector, will use this model of tackling this type of crime.

Deputy Mayor for Policing, Crime Criminal Justice and Fire, Bev Hughes, said: “Violent crime causes serious harm and blights the lives of victims, families and communities. In Greater Manchester, we are committed unequivocally to strong enforcement against violent crime. But enforcement alone is not enough. We have to prevent it happening in the first place as well as mitigate its effects on those caught up in its wake. That means intervening early using all the available evidence, insight and data to ensure we have the best possible impact on reducing violent crime and its consequences.

“This action plan builds on what we know from evidence and research to shape a coherent, consistent and innovative approach to tackling serious violence. We know change will not happen overnight although there will be things we can and will do in the short-term. But our approach must be sustained over the long-term, involving communities and professionals working together with us to tackle the underlying causes of violent crime to make fundamental change for the better.”

The VRU, set up in October 2019, works closely with academics, health professionals and community leaders, to provide insight into the problem of violence in our city-region and to work with communities to provide solutions.

It has so far received a total of £14.67m through the Home Office Serious Violence Fund, which also provides ‘surge funding’ to increase the police response to violent crime. In the first year of the ‘surge funding’, Greater Manchester Police (GMP) seized 1,732 weapons from our streets.

In addition, more than 3,000 visits have been paid to schools, youth groups and others across the city-region in a concerted drive to educate and inform the next generation about the threats posed by carrying a weapon or getting involved in violent crime.

The Serious Violence Action Plan highlights that from 2015 to 2018, knife crime in the city-region almost doubled, a statistic broadly in line with the UK-wide picture. Robberies increased at a disproportionate rate to the overall violence trend and a third of knife crime offences were linked to domestic incidents, while there have been concerns from schools and colleges about violence and behaviours.

Admissions to Greater Manchester hospitals with injuries caused by weapons involved in incidents of violent crime also increased during the same period. However, the most recent data sets suggest a decrease of 16% for all age knife-related hospital admissions between April 2018 and March 2020.

Deputy Chief Constable Ian Pilling, from Greater Manchester Police, said: “As a police service, we are committed to taking a collaborative approach to crime reduction across Greater Manchester. We are continuing to build on the successful work that has been ongoing for some time, which involves partnerships with GMCA, National Probation Service, health and education professionals, youth justice and local authorities with the aim to reduce violent crime across Greater Manchester.

“The funding received from the Greater Manchester VRU has enabled us to develop a longer term approach, investing in services and initiatives for young people. This significant piece of work aims to tackle serious violent crime and deter those who engage in violent conduct through education, prevention, disruption and enforcement.

“The work of the VRU has shown us that early intervention with young people to steer them away from violence and to tackle the root causes of them becoming involved in crime is key. It is important that we support the young people in Greater Manchester and provide them with skills and opportunities to enable them to live violence free lives. A large part of this is placing our communities and local partnerships at the heart of our approach by working with victims, families and community groups to reduce the number of offences.”

In February the Mayor of Greater Manchester, Andy Burnham announced a modest council tax increase to contribute in part, to the recruitment for more frontline police officers. The police service has suffered from years of central government cuts to funding. Around 80% of GMP’s budget comes from a central government grant, but this has been cut by £215m since 2010, which has seen the loss of 2,000 police officers and 1,000 non-police staff. Although the government has provided additional funding this year, the pressures on the police service remains while they focus energies to tackle serious crime.