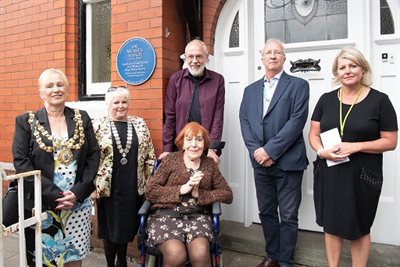 A permanent Blue Plaque has been unveiled in honour of a doctor dedicated to inspiring women in Wigan Borough.

The plaque was installed on Tuesday 31 August at Mesnes Park Terrace, Wigan, where her son Dr Colin Haigh lived with his wife Mrs Haigh.

Councillor Chris Ready, cabinet member for communities and culture at Wigan Council said: “This plaque will be a permanent acknowledgement of the inspirational work Dr Muriel Haigh did to galvanise a group of local professional women.

“The work she started has led to thousands of pounds being raised for charity and she helped celebrate the achievements of many young women in the community of Wigan Borough.

“It really is a special day seeing her memory and legacy permanently marked.”

In 1927, Dr Muriel Haigh was the first female doctor in Wigan Borough to open her own GP practice.

She practised successfully for 40 years and trained volunteers working at the Royal Albert Edward Infirmary before being admitted to the Venerable Order of St. John Ambulance as a serving sister – an honour bestowed upon her by Queen Elizabeth II. The following year, she was appointed Wigan Corps Surgeon.

Dr Haigh was nominated for the blue plaque by Soroptimist International of Wigan and their President Angela Holmes. The members want to recognise Dr Haigh for her work as a family doctor and her sensitivity to the needs of women, children, and the poor.

Dr Haigh was the founder and President of the Wigan Soroptimists in 1941 which connected Wigan to the global work of Soroptimist International and saw the group advocating for human rights and gender equality.

Angela Holmes, current President of Wigan Soroptimists, said: “Wigan Soroptimists, in their 80th year, are delighted that Wigan Council have agreed to commemorate the life of Dr Muriel Haigh – our founder member and first President – by placing a blue plaque at her family home. Dr Haigh devoted her life to serving the people of Wigan and had a particular sensitivity to the needs of women and children.

“As Soroptimists, we continue the work of Dr Haigh by inspiring action and transforming lives locally and internationally. Dr Haigh put Wigan on the international stage and we are particularly proud of our special consultative status at the United Nations.”

Wigan Soroptimist Dorothy Gladwin and local historian Tom Walsh also supported the nomination after going to great lengths to research Dr Haigh’s extraordinary life. Along with celebrating her work with the Soroptimist’s, the plaque acknowledges Dr Haigh as founder of the Wigan Music Society. Which was also founded in 1941.

Dr Haigh died in 1990, her funeral service was held at Wigan Parish Church.

Wigan Council launched its Blue Plaque scheme in 2018 in line with its commitment to increase interest in local heritage and culture, as well as commemorating links between locations and significant moments in history.

So far, plaques have been awarded to Alderman Thorley Smith, George Orwell and Pete Shelley.

As part of the scheme, the local authority committed to producing plaques until at least 2023, in line with its five-year cultural manifesto, The Fire Within.

Takeaways and Netflix to blame for young people failing to get on housing ladder,...