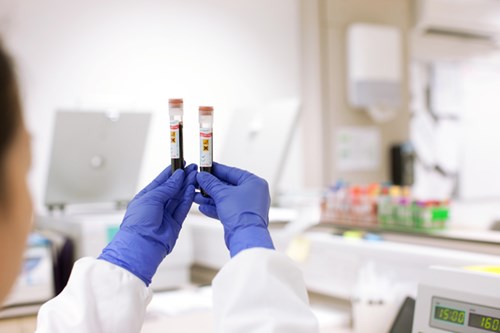 Researchers at The Christie NHS Foundation Trust in Manchester and CRUK Manchester Institute are leading a clinical trial funded by Cancer Research UK that is investigating a new, potentially game-changing blood test that could detect if melanoma patients are relapsing up to a year before the cancer could be picked up by a scan.

Approximately 80% of people with early-stage melanoma need no further treatment after surgery. However, for a small percentage of patients, tumours will go on to develop in other places in their body.

The melanoma research team has developed a ground-breaking blood test that can tell doctors whether cancer cells are still present or becoming active, even if a scan looks normal. The test looks for pieces of DNA in the patient’s blood that are known to have been shed from tumours. This is called ‘circulating tumour DNA’, or ctDNA. The data collected from previous work in the laboratory shows that patients who have ctDNA identified in their blood have an extremely high chance of the cancer returning.

Oncologists at The Christie now want to understand if earlier treatment with immunotherapy (a treatment where the body’s own immune system fights the cancer) of patients with ctDNA in their blood, who have a higher risk of relapsing, can improve their survival. The team will compare these patients’ responses with patients whose new tumours are picked up during a routine scan.

If the results of this analysis show patients benefit from earlier intervention, this could pave the way for the NHS to offer a simple blood test to determine which patients need treating early for their melanoma relapse.

Professor Paul Lorigan, consultant medical oncologist at The Christie who is leading on the trial explained: “Not only does this simple blood test tell us if the cancer is returning, but also could give reassurance to patients who don’t have further signs of cancer after surgery that they don’t need further treatment. If our hypothesis is proved to be correct, this will undoubtedly be a step change in how we treat patients in the future. This study focuses on patients with melanoma but potentially the blood test could be used for other cancers in particular lung and kidney as they also respond well to immunotherapy.

“Generally, the earlier cancer is discovered and therefore treated, the better the outcome for patients. We just need to prove this theory is right in this instance and how much of an impact it will have on a patient’s chance of survival.”