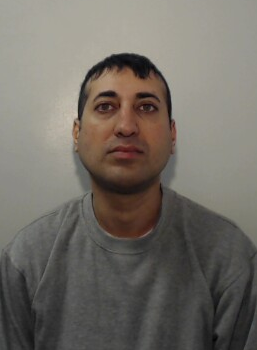 Amjid Hussain 38 , of Ebony Street, Blackburn has today been sentenced at Manchester Crown Court to 10 years in prison after pleading guilty to grooming and engaging in sexual communication with a child, grooming and sexual activity with a child and paying for the sexual services of a child.

Hussain will be put on an extended licence, as well as being subject to a sexual harm prevention order for 10 years and will now be on the sex offenders register for life.

In January 2020, police were called to a report of concern for the welfare of a 15-year-old girl at a hotel in Manchester City Centre.

Officers were alerted to this incident due to an observant member of the public who spotted the pair and was concerned about the behaviour they witnessed.

Officers attended and found Hussain in a private room with a 15-year-old girl. He was subsequently arrested on suspicion of rape and a number of mobile devices were seized.

Analysis of Hussain’s mobile devices revealed that between 2018 and 2020 he had been engaging in sexual communication with two additional teenage girls via a social media app.

On one occasion, in December 2019, Hussain had met one of the girls at a hotel in Leeds and during this meeting he paid for the sexual services of a child.

Detective Chief Inspector, Simon Moyles of GMP’s City of Manchester’s Complex Safeguarding Hub said: “I would like to thank the victims for their bravery and co-operation throughout this investigation and commend the work of the officers involved and the multi-agency work conducted across three forces to secure this conviction”

“Hussain groomed these young girls and engaged in sexual communication and activity with them to satisfy his own sexual perversion. I hope today’s sentencing provides a sense of justice to his victims and also sends a stark message that GMP will ensure anyone found to be engaging with a child in a sexual manner will face the serious consequences of their actions.”

Father of two year old girl who died in Heywood is charged with her...