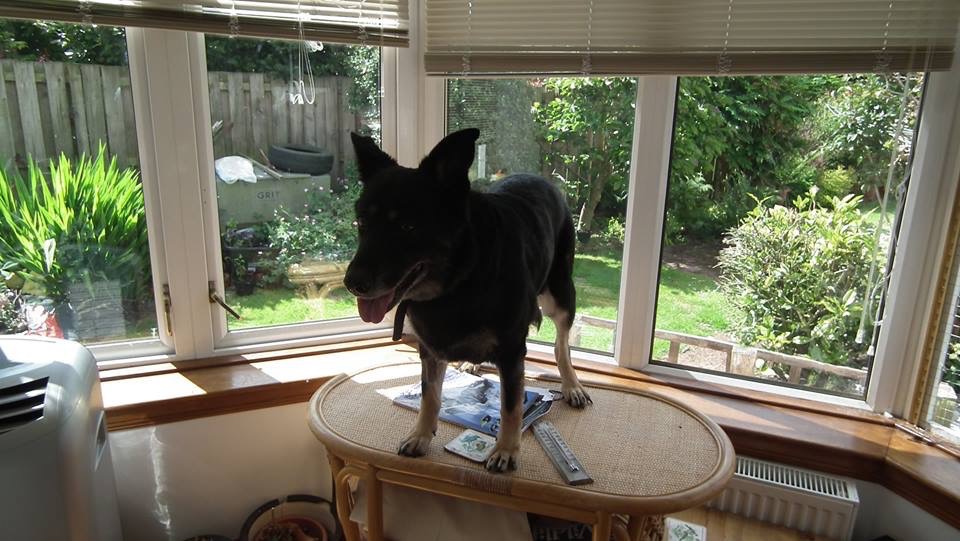 A cancer-ridden stray dog’s tale will showcase the dedication of dog lovers at Salford’s Dogs in Salford Festival this weekend.
Beryl, the German Shepherd cross, was found wandering in the city in February this year, with a huge, weeping tumour dangling from her stomach.

Vets said it was the one of the biggest tumours they had ever seen and gave her just two weeks to live.

But thanks to the determination of Salford City Council’s dog wardens and two canine charities Beryl is continuing to live happily at a doggie hospice in Scotland.

Volunteers there say, that for however long she has left, Beryl is enjoying all the best life has to offer a dog – tasty food, lots of treats, heaps of kisses and cuddles, plenty of company, many, many happy walks and time in the sun.
Beryl’s story began when Salford City Council dog wardens Erica Eaton and Will Harris were asked to collect the stray from local vets. They named her Beryl after characters from the Liverpool based hit series The Liver Birds.

Vets advised that due to a huge, weeping tumour, the poor pooch might have just a week to live so Erica and Will were determined to make her last few days as happy as possible.

“When Beryl looked at us we knew she wasn’t ready to give up. We were determined she wasn’t going to spend her last days in kennels,” said Erica.

“We contacted Rochdale Dogs Home (RDR) and within 10 minutes they had lined up a temporary foster home where Beryl could even play with other rescue dogs. Tess drove down from Chorley to collect Beryl and spent the afternoon bathing and brushing her matted fur back to a lovely silky coat. We hardly recognised her when we got photos later that night.”

RDR contacted The Maggie Fleming Animal Hospice in Scotland which specialises in caring for terminally ill abandoned animals. Vets confirmed that while Beryl was well enough to travel, her tumour would return even with surgery. She might have just two weeks to live.
Another RDR volunteer drove Beryl to Scotland where she underwent an operation to successfully remove the painful tumour and prolong her life.

“We know that even though the operation was successful, the cancer is likely to return but Beryl is happy, free of pain and able to enjoy her life unhindered by that horrible tumour,” added Erica.
“We allowed the operation to go ahead to give her a life worth living, for however long she has left. We don’t know how long she will have but we expect it will be many months, as we wouldn’t have proceeded with the operation if it was only going to give her a couple of weeks. She’s now safe, loved and knowing she is happy and full of life is an absolute joy.
“We’re showcasing Beryl’s tale at the Dogs in Salford Festival to help raise funds for the amazing work Rochdale Dogs Home do day in day out. If we pick up a stray dog and can’t find its owner, we take them to RDR and know they will be well looked after until they can be found a new home.

“It’s also a way of reminding owners that they must have their dogs chipped and keep the details up to date. It’s not only the best way to get a dog back home quickly, it’s the law.”

The Dogs in Salford Festival is on Sunday July 24 at Clifton Country Park, Salford, from 11am to 3pm. It includes a dog competition, agility course, free micro chipping, rescue stalls as well as fun activities including bouncy castles, face painting and balloon modelling.

The dog competition will consist of six categories costing £1 to enter each category. The categories are Waggiest Tail, Best Handler under 12 years old, Prettiest Girl, Handsome Boy, Best Scruff, Golden Oldie (for dogs seven years and older). The winners from each category will then be entered in to the best in show. Each winner will receive a rosette, certificate and a prize for the dog.