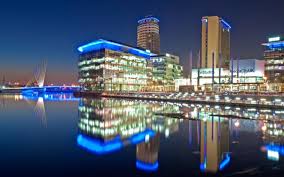 The BBC’s relocation to Salford has led to a jobs boom in MediaCityUK, but has had little positive impact on employment across Greater Manchester

This is according to new research published today by the think tank Centre for Cities, which examines the economic impact of moving public sector jobs from London to other parts of the country.

In particular, it focuses on the BBC’s relocation of national operations to Salford in 2011, which it claimed would bring up to 15,000 jobs to the wider region.

However, the findings of the report show that while the relocation led to considerable jobs growth in MediaCity, its impact on the wider city region was limited with important implications for the Government’s decision on relocating Channel 4.

Moving the BBC to Salford has had a significant impact on employment at MediaCity itself, which gained 4,600 new jobs between 2011 and 2016, equivalent to a 43% increase in employment.

Out of these new roles, nearly 4,000 were in the media, including 2,000 jobs in BBC national operations which moved to MediaCity from other parts of the country as part of the relocation.

However, many of the new jobs resulted from the displacement of businesses from other parts of Greater Manchester, rather than from new firms starting up in the city region.

More than a third of the new jobs at MediaCity were in businesses already based in other areas of Greater Manchester in 2011, which subsequently moved to Salford after the BBC’s relocation, including around 640 jobs in the BBC’s local operations, which moved from Manchester city centre).

Only 145 jobs were created in MediaCity by firms which moved all their operations from elsewhere in the country before 2011, showing that very few firms followed the BBC’s lead in relocating to Salford.

Moreover, the impact of the BBC relocation on employment across Greater Manchester was negligible.

However the report has been slammed by local politicians and the BBC ans who say it ignores the creative, digital revolution sparked by BBC relocation.

“We are surprised by this report as all other independent assessments of the BBC’s move to Salford have recognised the considerable benefit of the move, not just to the immediate MediaCityUK area, but to the wider economy of Greater Manchester and the North West. The BBC was crucial to the development of MediaCityUK, bringing thousands of jobs, millions of pounds of investment and supporting the wider creative industries. To suggest our investment only benefits Salford, and not the rest of the region, seems very strange given the scale and size of our operation today. As well as delivering economic benefits, the goal of our relocation was to better serve northern audiences, support the development of a world-class creative sector in the North, and bring financial benefits to the BBC. By all measures, including economic impact, we are succeeding.” says the BBC Press Office

“The BBC’s move to Salford has benefited not just Salford, but Greater Manchester as a whole and indeed the entire North West. As well as the direct benefits of the thousands of people that are now employed across Greater Manchester as a result of the BBC’s relocation, the move North has been instrumental in sparking a creative and digital revolution in the city region

“Central government recognises the need for specialist sector-specific clusters of excellence to drive forward an industrial strategy which works for all of the UK. As a result of Greater Manchester’s lobbying, this place-based approach to excellence formed a key plank of the government’s recent green paper on the UK’s industrial strategy.

“We have seen phenomenal growth in our creative and digital sectors in Greater Manchester, making a compelling case for industrial clusters of excellence. The sector is worth £3.1bn to Greater Manchester’s economy – that’s double what it was in 2010. There are 55,000 thousand people employed in the sector. We are producing some of the most highly skilled graduates in the sector and are now in the top 20 European digital cities.

“This is a British success story, and the BBC’s move here has been a central part of that. It’s a cause for real celebration, and critical for the rebalancing of the nation’s economy to ensure that all of the nations and regions – and not just the capital – benefit from our amazing creative and digital talent.

“It is precisely because the BBC and ITV have a strong presence in our city region that we are such an attractive proposition for others, from Channel 4 to the 1,600 start-ups formed in Greater Manchester in the past year.”

While Mike Blackburn, Chair of the Greater Manchester LEP said:

“Quite frankly a report that says the BBC has not had a positive impact on Greater Manchester is ridiculous.

“The BBC move to Manchester has been extraordinary, transformational and was the catalyst for a media and creative boom, creating the second largest cluster of digital and creative business in Europe.

Greater Manchester residents have over 1000 green spaces to choose from this National Picnic...

Road in Pendleton cordoned off after suspect device found